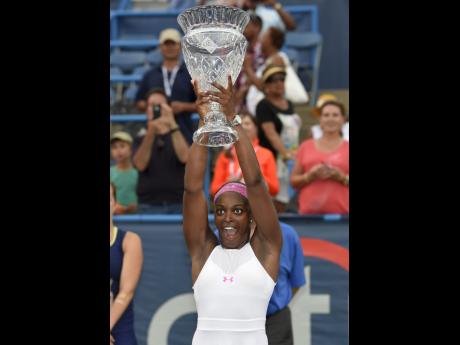 AP
Sloane Stephens poses with the trophy she won in the women's singles final match at the Citi Open tennis tournament yesterday.

Sloane Stephens sat at a table for her postmatch news conference, eyed the big glass trophy sitting at arm's length, and asked, "What happens to this?"

Forgive the 22-year-old American for not knowing. She's never been given championship hardware at a professional tournament before.

Stephens earned a WTA title for the first time yesterday, overwhelming Anastasia Pavlyuchenkova of Russia 6-1, 6-2 in the final of the hard-court Citi Open.

"Nothing was rushed. Nothing was given to me. I had to work for everything. It was just nice that all of the hard work and everything I've put into it - now I can say that I have a tournament title," Stephens said. "Everything happens when it's supposed to happen."

It was her first final as a pro.

Entering this tune-up for the US Open, she owned a .685 career-winning percentage at Grand Slam tournaments, including getting to the second week in seven appearances, with a semi-final showing at the Australian Open and quarter-final run at Wimbledon, both in 2013. At her news conference, a reporter mentioned that Stephens has been considered the best women's tennis player without a title for quite some time.

"Now you'll have somebody else to talk about," Stephens replied. "I'm sure there's someone else, so I will pass that torch on to whoever's behind me."