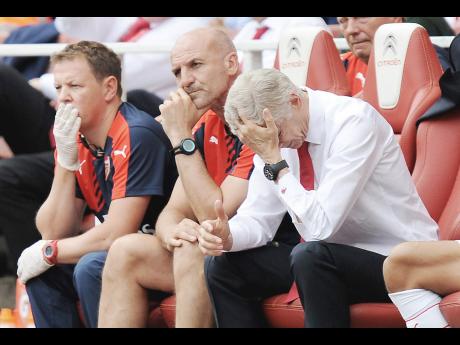 AP
Arsenal manager Arsene Wenger (right) puts his hand to his head during the English Premier League match against West Ham United at the Emirates Stadium in London yesterday. Arsenal lost their first match of the new season 2-0. 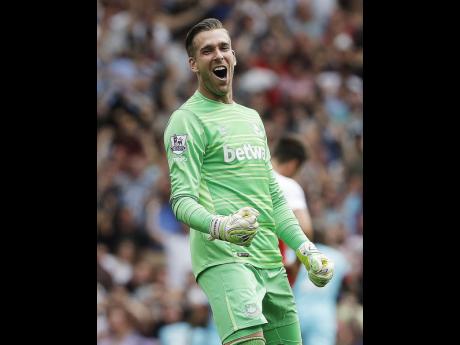 AP
West Ham’s goalkeeper Adrian celebrates after his team scored during the English Premier League football match against Arsenal at the Emirates stadium in London yesterday.
1
2

Two mistakes by new goalkeeper Petr Cech sent a much-hyped Arsenal side crashing to a 2-0 defeat at home to West Ham, while Liverpool's start to the new English Premier League season ended with a late 1-0 win at Stoke yesterday.

Cech arrived from Chelsea with a reputation for keeping clean sheets, but a header from Cheikhou Kouyate in the 43rd minute and a low shot by Mauro Zarate in the 57th minute unexpectedly beat the 33-year-old keeper.

There was little goalmouth action at Stoke until Liverpool's Brazilian midfielder Philippe Coutinho scored with a ferocious shot from 25 metres in the 86th minute.

The points were shared at St James' Park where a Newcastle side under new coach Steve McClaren drew 2-2 with Southampton in the day's other game.

Arsenal toiled in the sunshine at Emirates Stadium, dominating possession but lacking ideas against a West Ham side that has been playing competitive preseason football in the Europa League under new manager Slaven Bilic.

"We were not convincing offensively, nor defensively," Arsenal manager Arsene Wenger told Sky Sports. "I knew before the game it would be a tricky game, that West Ham could be more advanced in their preparation than us.

"But you feel guilty, because if you cannot win the game - don't lose it. I believe that just before half-time and just after half-time we gave very, very cheap goals away and then we made it even more difficult for ourselves."

Tipped to be title challengers this season after winning two consecutive FA Cups and beating champions Chelsea 1-0 in the Community Shield a week ago, Arsenal's league opener was a reality check.

"We have to keep our focus," Wenger said. "It's just the start of the season. I'm convinced that we will respond well to that accident."

Blame for those accidents is bound to rest on Cech, after he rushed out to clear a free kick, but his gloves arrived second to Kouyate's head. Arsenal's marquee signing for a reported fee of about £11 million ($17.3 million) was then wrong-footed by Zarate's shot from outside the area.

"Any championship is never a motorway," Wenger said. "It's always (about) responding well to accidents. Today, we have been hurt mentally and it's a good opportunity to show we respond."

Bilic had no doubts about the impact of yesterday's victory, which also saw an impressive debut from the youngest West Ham player to appear in the Premier League - 16-year-old defender Reece Oxford.

"It's a great start for us," Bilic said. "Not only because of the three points, but it's three points against a team that is one of the main contenders for the title this year and that had done really well in the preseason.

"And if you're to add that, that it's a London derby and in the last five years we lost all the games home or away against them, that makes it even bigger."

Liverpool also faced a big game of sorts, taking on a Stoke side that had humiliated the Reds in their final game of last season - inflicting a 6-1 defeat on Brendan Rodgers' team.

The tables were turned yesterday by Coutinho's moment of magic, when the Brazilian took possession and shrugged off a challenge before unleashing a booming shot that grazed the tips of Jack Butland's gloves on its way in.

"I think we showed a different type of will and different character than, obviously, the last time we were here," Rodgers said. "We defended really, really well and good organisation, and we knew that if we could hold the game and stay tight, then, obviously, as the game wore on our quality can come through.

"It worked perfectly for us and I thought the players were outstanding ... and it was a wonderful, wonderful goal."

McClaren, meanwhile, had to settle for a point in a game where both sides had the lead for a while.

Goals from Papiss Cisse and new signing Gini Wijnaldum put Newcastle in command after Graziano Pelle's 24th-minute opener for the visitors. But substitute Shane Long rose to power home a cross from Dusan Tadic with 11 minutes to go to secure a point.

The first round of matches concludes tonight, when Manchester City travel to West Bromwich Albion.