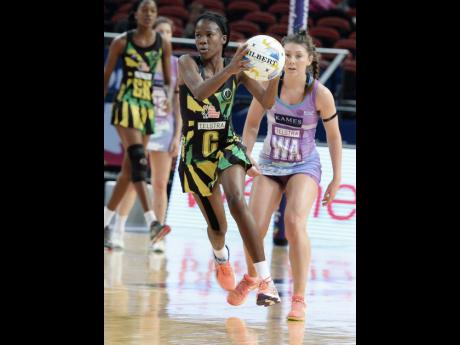 Jamaica's Sunshine Girls were in a militant mood yesterday, as they rebounded from the disappointment of their Pool B defeat to England in the 2015 Netball World Cup in Australia to dispatch Scotland 71-24 in a one-sided affair.

The two nations advanced to the second round (Pool E), where Jamaica played against New Zealand earlier this morning, and are to face Uganda and Malawi, with the top two moving on to the semi-finals.

Australia, South Africa, Wales and England will contest Pool F, which will decide the other two semi-finalists.

Sunshine Girls head coach, Minneth Reynolds, told The Gleaner in a telephone interview that although the team was disappointed after their loss to England, the Girls remain resolute and are even more determined and focused on their goal.

"The focus has remained the same although they lost to England. We were a bit disappointed at first, but they (Sunshine Girls) are still on a mission, so we bounced back against the Scottish," she said.

"They probably put more into the Scotland game because they wanted to prove to themselves that they are worthy contenders and that we can compete at our best at anytime," she continued.

A win over New Zealand this morning would put the Jamaicans in pole position to win their qualification group and set a likely semi-final date with England. That is if things go according to plan and Australia win Pool F.

Prior to the match, Reynolds said they intended to win against New Zealand and top the group.

"We are looking forward to New Zealand; we know it's going to be a very tough game, but we are sticking to the task. Our attack will have to be penetrative, and we cannot stop at anything, we just have to be strong.

"We want to win this game and all the games in the group. It's important to win all your games, as winning your games only strengthens your confidence of getting to the final. So the objective is to win, and that is what is expected, and the Girls are looking forward to go out there, compete and win," she continued.

"The belief is still alive, the determination and the confidence is still there, and we are definitely going for gold, so we are going out to play our best, and we will be going very hard," added Reynolds.