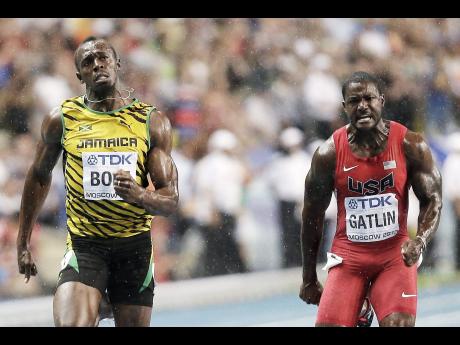 The now distinct possibility of tainted American Justin Gatlin dethroning Usain Bolt at the 2015 World Championships in Beijing has become even more of a clear and present danger to all concerned.

One former British Olympian, Darren Campbell, has taken a more convoluted approach to the scenario, expressing his hope that Gatlin beats Bolt in Beijing so that the powers that be will finally pay attention to the scourge of drug use in the sport.

The entire swing of sentiments going into these World Championships is against Gatlin winning, despite him being the clear world leader in both the 100 and 200m events over the last two years.

The man is like an unwelcome guest in his own house, with duty of evicting him falling to Usain Bolt.

My sincere hope is that Bolt and his handlers do not make the mistake of taking onto their shoulders the wider off track intricacies of the sport, at the expense of what is good for Bolt the champion athlete and Bolt the Legend.

They should leave the Justin Gatlin headache to the designated administrators of the sport.

We know the erudite mind that Glen Mills possesses on all matters of track and field, in particular as it relates to Bolt. I maintain that if there is even the slightest chance of Bolt losing his sprint titles to Gatlin in Beijing, then the big Jamaican should call it a "no go". Even at this late stage.

Bolt the sprinter has nothing to prove to anyone. At this stage of his career, the preservation and protection of his legacy should be more important than trying to write the wrongs of the world governing body of the sport.

The normal pressure of competition, the task of trying to get into championship winning shape this season, compounded by the threat of a hungry, motivated and feisty competitor like Gatlin is in and of itself enough to bear. The consideration of the consequences of having a two-time dope cheat becoming the face of the sport while significant, is simply not Bolt's war to fight.

The IAAF is responsible for leaving the door ajar, allowing Gatlin and others to return to the sport. They are the ones who should fix that problem, not Bolt.

Bolt needs to concentrate all his energies on maintaining his status of being the world's fastest man and the greatest sprinter ever, as an active competitor that should be his obligation to himself and to the sport.

If the big Jamaican is not in shape to beat Gatlin in the next couple weeks, then he should simply step away from the track, begin the arduous task of his preparing to get into the best possible shape of his life for the Rio Olympics in 2016 and look to go out in a blaze of glory.

Along the way he should stay clear of the IAAF politics.