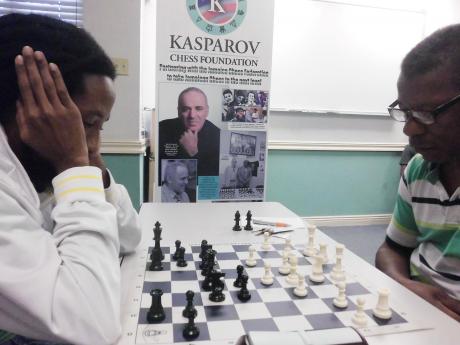 Contributed
Malaku Lorne (left) survived a scare from National Master Geoffrey Byfield to earn a critical draw in the final round.

Lorne went into the final round as the sole leader with 4.5 points from five games, only a half-point ahead of tournament favourite and current national champion Elliott.

In the final round, Elliott faced veteran Eton Chin, who he dispatched fairly easily to end on five points. Lorne, however, had to endure a close battle with another veteran, National Master Geoffrey Byfield, before earning a draw.

Lorne and Elliott, therefore, ended regulation play tied on five points each and had to contend a two-game play-off to determine the winner of the tournament.

In the end, Lorne registered a relatively easy 1.5-0.5 victory to win the play-off match and qualifier, plus free entry worth US$1,500 to the Millionaire Chess Open, scheduled to take place from October 8-11, 2015, at the Planet Hollywood Resort and Casino in Las Vegas, Nevada, United States.

Lorne's airfare and accommodation in Las Vegas will also be covered as part of his prize for winning the Qualifier.

The Qualifier was sponsored by the Millionaire Chess Open, the Kasparov Chess Foundation, the Jamaica Olympic Association and Chrystar Villas hotel.