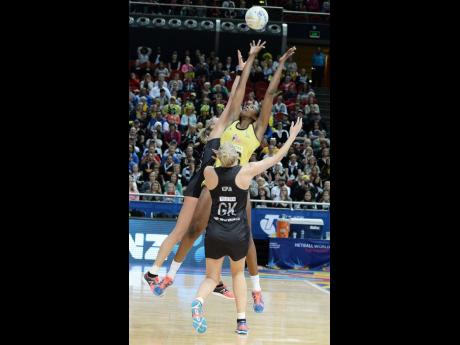 Sunshine Girls captain Nicole Aiken-Pinnock says despite going down to their second defeat at the Netball World Cup in Australia, to New Zealand in their Pool E qualification round opener yesterday, they walked away from the game knowing that the top teams are not unbeatable.

The Sunshine Girls went down to World number two New Zealand 55-48 in Pool E, despite being ahead 27-24 at half-time.

The squadron leader acknowledged that they made mistakes in the game against New Zealand and England that cost them, but insists that those lessons will serve them well in the play-offs.

"A lot of persons thought that New Zealand would have walked over us, but our performance goes to show that nothing is impossible. We walked away from those games knowing that these big teams are beatable, we just have to step up and work harder," Aiken-Pinnock said.

In games against the number three-ranked England and world number two, New Zealand, the Jamaicans surrendered first-half leads to lose. Aiken-Pinnock said they need to press home their advantage and stop letting their opponents back into the game.

"In both games, we had good first halves, but we made too many mistakes in the second half, and it cost us. We have to make sure that once we are ahead, we take care of our centre pass and ensure that we score from it and keep ahead," she stressed.

Before the team can think about the semi-finals, they have Uganda on Thursday and Malawi (Friday) in their remaining Pool E games. Aiken-Pinnock says they remain just as motivated as ever for the gold medal.

"We still have a chance to be in the semi-finals; we have two games to go and we have to make sure that we win these two games first and foremost. We are not demotivated going up against Uganda or Malawi. Our focus now is on playing the semi-finals, so we are taking it one game at a time.

"We play next against Uganda and we will play them and try to get over one hurdle at a time before we get into the meat of the matter, which is the semis," the Jamaica team leader said.