Bolt's record will stay in the books - Ozil 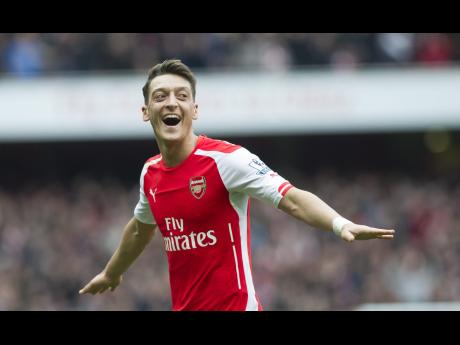 The World Championships in Beijing are starting in a couple of weeks. What is your favourite track and field event?

"The sprints fascinate me the most, not just the event itself, but also the stars lining up at the start line."

"The last time I ran a timed 100m was probably back at school," he laughs.

"In training we normally focus on 40m sprints, but now that you mention it, I'd be intrigued to see how fast I could run a 100m these days."

Well, there's only one way to find out. We're more than happy to arrange a race. Who is your favourite track and field athlete?

"I have to admit I haven't got a favourite athlete as such, but it always makes me happy to see an athlete like Robert Harting winning awards such as Athlete of the Year in Germany. It shows how popular the sport is."

"The time will always be synonymous with his name unless he manages to go even faster, of course. To me that is what every sports person's goal should be: to have their performance remembered.

"I believe his 9.58 will stand in the record books for quite a while until at some point in the very distant future that one-in-a-million guy will come along and beat it."

How important is running in your physical preparation?

"Running obviously plays a vital part in my daily training routine more so in pre-season than during the season. It improves your stamina, you can recover quicker between two sprints, and you're less likely to suffer from injury.

"We have a lot of technically equally strong clubs in the Premier League, so it's always beneficial to have that extra bit of horsepower in the final minutes to rely on."