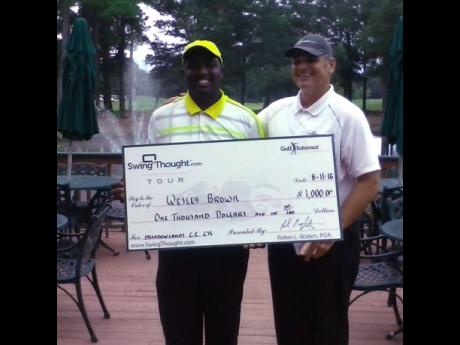 Jamaica's rising professional golfing star, Wesley Brown, was in irrepressible form on Monday in capturing the Meadowland Classic Golf Tournament in the United States of America.

Brown was winning his third tournament and the first of the year while participating in the South Carolina Swingthought.com Pro Series Golf Tour.

The Sandals Golf Club caddie shot even par to start the final round two strokes behind the leader, but produced a blistering round to shoot two under for the day and win the event by three strokes.

"I am over the moon with this win," said Brown, beaming from ear to ear. "I had expected to have my first win of the

season earlier in the year, but I struggled out of the gates. Today (Monday), I stayed calm and used the experience gained last year and played some great golf."

Brown noted that it was not an easy victory as the course was challenging.

"But it shows how much I have grown as a golfer that I can grind out a win like this," he observed. "It is a great belated Independence gift for all of Jamaica."

He added: "I really want to thank my sponsors, Sandals Resorts International, for once again giving me the opportunity to pursue my dreams. It is to their credit that they have continued their support, and I am looking forward to bigger and better things."

The golf pro will return to action next week at the prestigious Kandy Waters Memorial Golf Tournament in Augusta, South Carolina, where he is expected to line up against a stellar field of 133 golfers on the 72-hole championship course, confident that he can maintain his rich vein of form.