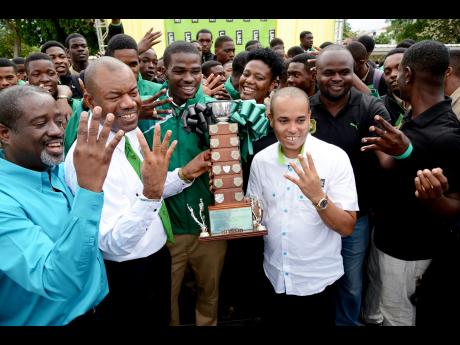 Calabar High School's plan to open its new synthetic track at its Founder's Day ceremony next Wednesday has been pushed back, at least until next month end.

The Red Hills Road-based institution will be the first high school in Jamaica with such a track.

"The original plan was for the track to be completed in time for our Founder's Day on September 12, but that has been put back. We are cautiously optimistic that it will be ready next month end," Principal of Calabar High, Albert Corcho, told The Gleaner yesterday.

Corcho said the football field that is already finished will not be in use until the track is completed.

"The football field is basically ready, but we will wait until the track is completed before activity is on the field. It is fully grassed as we have a well that pumps water onto the field," Corcho disclosed.

"The synthetic track at Calabar will be the first for a high school in this hemisphere. The work is being done by the same contractors, VSW Regupol, who did the G.C. Foster College track," he noted.

With regards to the financing of the project, it started from a government allocation of $10 million apiece to six high schools. However, Corcho said they needed more funding to complete the project. He was unable to reveal the total cost.

"The Sports Development Foundation, through the Government, granted $10 million, and our stakeholders, such as the Old Boys and others, contributed a whole lot of money for the project," the Principal said.

Meanwhile, coach of Calabar's Manning Cup football team, Bradley Stewart, says he is hoping that the team would be able to host home games in the preliminary round on the upgraded field.

"We would love to play matches on that field, but it is not expected to be in use until the next seven weeks. The track has to be completed before we can use it for games," Stewart added.

"However, we will play on the field with the cricket pitch during the preliminary round of the Manning Cup," he said.

Calabar last won the Manning Cup in 2005 under the guidance of the late David 'Wagga' Hunt.

Stewart is in the second of a three-year plan to bring back glory to the famed school.

"We understand that with a good football field, that can bring glory. We have a three-year plan that started last year with coach Bradley Stewart, so with an improved field, we are expecting good things from all teams at Calabar," Corcho pointed out.