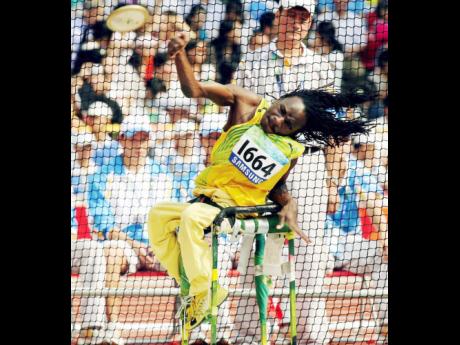 Like a true ambassador, Alphanso Cunningham answered his country's call, led from the front for Jamaica's six-member contingent and struck an early gold in the men's discus F51/52/53/57 Class at the 2015 Toronto Para Pan American Games on Monday night.

The country's Paralympic star thrower opened the medal count, yet again, and set the tone for what is expected to be 'a-podium-finish-a-day' for Jamaica, according to chef de mission, Edmund Jones.

Despite being already used to the big stage and competing under pressure at the highest level, the Jamaican delivered spectacularly as promised.

"The guys showed grit and determination, but I suspect I wanted the gold more," he outlined of his gold medal effort.

Cunningham's class is known, having achieved a world record 24.30 metres in the men's F52-53 Javelin at the IPC Paralympic World Athletics Championships in Lyon, France, two years ago.

The Jamaican, who clearly has no intention of slowing down, is already looking forward to more international dominance.

"Come October, it will be tough, tough. But let's see; the world may very well be at my feet," he warned ominously of the World Athletics Championship scheduled for Doha in October.

With Jamaica's camp going into those Games hoping for a medal per member, Jones, who spoke to The Gleaner from Toronto yesterday, maintains that "a podium finish per day is on the cards".

"I am not going with a medal per member, I am expecting a podium finish a day from the team," he said.

"I am optimistic about the team we have here," Jones said.

"Alphanso (Cunningham), predictable in the way he focuses, handled the competition and delivered. He is a model athlete," the coach assured.

The Jamaicans were on the hunt for more medals yesterday, with Sylvia Grant in the women's F56/57 shot put, while Tanto Campbell is on a medal charge in men's F54/55/56. Jamaicans are being urged to support the Para Pan team on of the Jamaica Paralympic Association website for daily updates and videos at www.jamaicaparalympic.com.