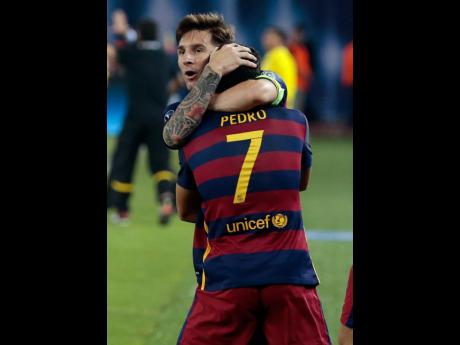 Lionel Messi scored twice and set up the winning goal as Barcelona started the season in dramatic style by beating Sevilla 5-4 after extra time to lift the UEFA Super Cup yesterday.

The action-packed, all-Spanish match was won when Pedro, linked by British media with a move to Manchester United, scored from close range after a shot by Messi rebounded in the 115th minute.

In the final seconds of extra time, Sevilla defender Adil Rami had a golden chance to send the match to penalties, but missed an open goal from close range.

Earlier, Sevilla had battled back from 4-1 down to 4-4 as Barcelona's fitness was tested in their first competitive match of the season - Europe's curtain-raiser between the winners of the Champions League and the second-tier Europa League.

European champions Barcelona went behind three minutes into the game when Ever Banega scored from a free kick from the edge of the penalty area.

Messi curled two direct free kicks past Sevilla goalkeeper Beto in the seventh and 16th minutes and was a constant threat in attack throughout the first half, though he made less of a mark after the break.

Barcelona's third came shortly before half-time when Luis Suarez pounced on the rebound after his shot was parried by Beto and crossed for Rafinha to score.

Suarez grabbed a goal in the 52nd minute following a poor pass by Sevilla defender Benoit Tremoulinas. The French left back gave the ball away to Sergio Busquets, who played in Suarez to apply a calm finish. However, it was cancelled out almost immediately when the unmarked JosÈ Antonio Reyes ran in at the far post to steer home a cross by Vitolo.

Vitolo was again in the thick of the action a quarter of an hour later as he tried to reach a cross from Tremoulinas, but was fouled by Jeremy Mathieu, playing at left back for the injured Jordi Alba. The resulting penalty was hit hard and left by Kevin Gameiro.

Sevilla pulled level when debutant Yevhen Konoplyanka slotted in from close range off a low pass from Ciro Immobile in the 81st minute.

Having won the Spanish league and cup titles, along with the Champions League, lifting the Super Cup keeps Barcelona on track to win six trophies in a calendar year, a feat the club last achieved under Pep Guardiola in 2009.

Next up is the Spanish Super Cup against Atheltic Bilbao on Friday and Monday, before the Club World Cup in December.