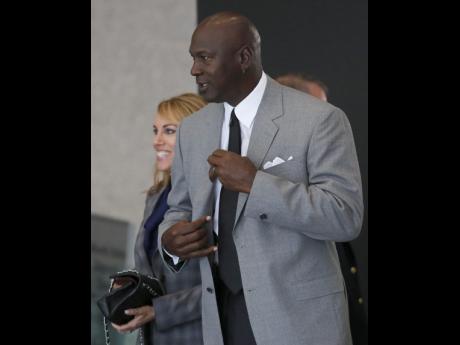 AP
Michael Jordan enters the federal courthouse yesterday in Chicago for a civil trial that will examine the market value of the basketball star's identity.

Jordan in court for trial on his brand value

Michael Jordan has arrived at a Chicago federal courthouse for a civil trial that will examine the market value of the basketball star's identity. The trial that began yesterday stems from a lawsuit the ex-Chicago Bull brought against a

grocery-store chain for the unauthorised use of his name and persona in an ad.

The six-time NBA champion entered through front doors after a judge denied his request to enter through a security tunnel. Jordan walked through a metal detector and showed ID to security. A judge previously found the now-defunct Dominick's Finer Foods invoked Jordan's identity without permission. The unresolved issue is damages.

The 2009 magazine ad congratulated Jordan on his Hall of Fame induction. Over a $2-off steak coupon, the text says, "You are a cut above."

Jordan is expected to testify.

Olympic discus champion Robert Harting will not defend his World title in Beijing later this month because he is still recovering from a knee injury. Harting told reporters yesterday that "it was absolutely not possible" for him to compete at the World Championship because he did not want to risk another injury ahead of the 2016 Olympics in Rio de Janeiro.

Harting has not competed in a major meet since tearing his knee ligaments 11 months ago. The German won the last three World Championship titles and is the 2012 Olympic champion.

Harting led a group of athletes who released a video message earlier this week saying track and field's world governing body had "betrayed" them by not doing enough to fight doping.