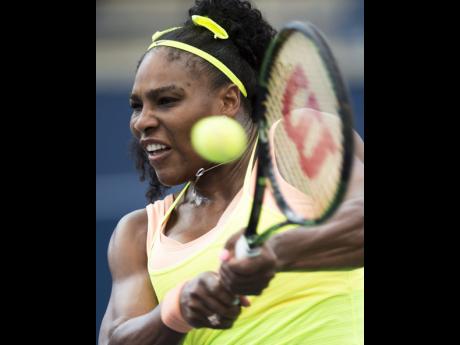 AP
Serena Williams, of the United States, hits a return on her way to defeating Flavia Pennetta, of Italy, at the Rogers Cup tennis tournament yesterday.

Top-ranked Serena Wil-liams rebounded to beat Italy's Flavia Pennetta 2-6, 6-3, 6-0 yesterday in the first round of the WTA Tour's Rogers Cup.

"I really had an off day," Venus Williams said. "It was definitely a long wait and tough to not warm up. My opponent and I were under the same conditions, and she played really well."

Rain washed out most of the matches scheduled in the women's half of the draw and Venus Williams and Lisicki didn't take the court until after 10 p.m. local time.

When they did, the 14th-seeded Venus Williams was not sharp, giving away more than a half-dozen points on double faults. Lisicki was strong in her service game and rarely made the kind of mistakes that cost her opponent.

Fans who waited out the rain tried to encourage Williams during her struggles.

"Against Venus, you have to play well to be able to beat her," Lisicki said. "You have to be ready and fight for every point, and I'm very pleased with my performance."

Lisicki looked at the draw and knew she had to be prepared from the start of the tournament. She did not know she would have to wait more than three hours from the scheduled start time to get going. Instead of her usual rain-delay ritual of pingpong, the 24th-ranked player in the world played a game of UNO. After being so dominant against Venus Williams, Lisicki might have to try that again.

During the match, some fans cheered on Lisicki, but many tried to encourage Venus Williams as she struggled.

"It's hard to just, first round, play a player who doesn't give you any rhythm," Venus Williams said. "Just a tough draw and bad luck."