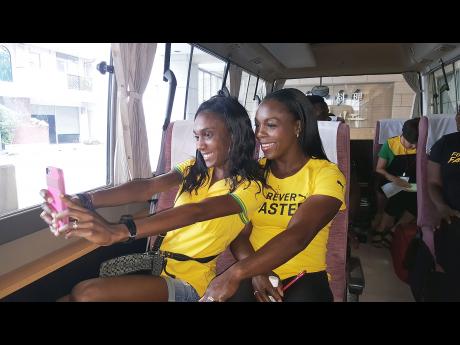 Contributed
Natoya Goule (left) takes a selfie of herself and fellow Jamaica athlete Veronica Campbell-Brown, as they journey on a bus in Japan. The Jamaican athletes are involved in a team training camp in Japan, as they prepare for the August 22-29 World Athletics Championships in Beijing, China.

Sprint king Usain Bolt is expected to arrive in Tottori, Japan, within two days, while Shelly-Ann Fraser-Pryce, Kaliese Spencer, Elaine Thompson and the majority of the MVP Track Club athletes selected to represent Jamaica at the World Championships are also yet to arrive, due to visa issues.

Speaking from the team's hotel in the Japan prefecture of Tottori, where Jamaica's athletes are staging a pre-World Championships training camp, team manager Ludlow Watts told Gleaner Athletics that he is expecting the triple world record holder Bolt to join the group within two days.

Watts also admitted that not having all 53 athletes selected to represent the country in camp, some five days after they arrived in Japan, was somewhat of a concern for the technical staff.

"I would have to say 'Yes, it affects us', because if you have everyone together, you would be able to do everything together, but if you don't have everyone, it means that you would not get the maximum out of the whole plans for the camp," said Watts.

"Bolt? We expect him (to arrive in Japan) shortly. I cannot be sure (when exactly he will arrive), but he should be here within two days," Watts said.

The 15-strong MVP group, which also consists of experienced campaigner Nesta Carter, along with the likes of Janieve Russell, Stephenie-Ann McPherson, Julian Forte and Rusheen McDonald, were not able to travel to Japan because of difficulties in obtaining their visas for China, from their European base in Lignano, Italy.

Reason for the delay

They were originally advised by the Jamaica Athletics Administrative Association (JAAA) that they would be able to secure their Chinese visas from any Chinese embassy in the world.

The group, which started arriving in Japan yesterday, will now receive their documents for China through the Japanese government.

Fraser-Pryce is expected to arrive in Japan by tomorrow.

"That issue had to do with some visa issues in Europe. Visas for China will now be obtained in Japan. MVP is, of course, based in Italy at this time of the year and they (Italian officials) wouldn't issue visas to China for non-Italians there," Watts explained.

"The Japanese foreign ministry has made arrangements with the Chinese embassy so they can secure the visas within a day or two after arriving here."

"The only reason why everyone isn't already in Japan is because we thought we could get the Chinese visas from Italy. The JAAA advised us that we could get the visas for China there and again confirmed even after (Chinese Embassy in) Milan said no," said James. "Once we got all the athletes, (MVP assistant manager) Aundre Edwards went twice (to the Chinese Embassy in Italy) and the second time that he went, they said they couldn't do it for non-Italians, so the decision was to fly into Japan and get the visas there."

James also noted that the difficulty since then, has been to get earlier flights into Japan, which best accommodate the large group.

O'Dayne Richards and Jonia McDonald are already in Japan, with several others expected to arrive in Japan early tomorrow (Japan time).

"Getting in there is another challenge because, as you know, there are a lot of them - 15 athletes, coaches, managers, massage therapists - but everyone will be in Japan this week," added James.

"We speak every day to the JAAA and they know the schedule and are making arrangements to pick them up and so on, so it's working well," said James.