Morgan getting in shape for big throw at World Championships 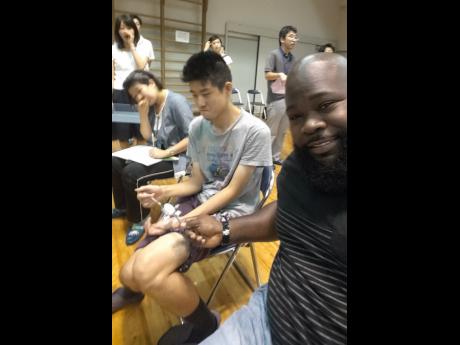 Contributed
Jamaica’s discus thrower Jason Morgan (right) participate in a Japanese ritual while the team made a courtesy call at a school yesterday. Jamaica’s athletes are in Japan at a pre-World Championships camp.

Morgan, the bronze-medal winner from last year's Commonwealth Games in Glasgow, is, however, remaining positive in the build-up to the August 22-29 meet set for Beijing's Birds Nest as he points to his experience competing on the Diamond League circuit and improved physical conditioning as factors behind his confidence.

"What I threw earlier this year, having the world lead, it's a good feeling to be back in a good place mentally and physically. I had two aims: to break the national record and qualify for the World Championships. But I have a next aim right now and that is to get a medal. That's the focus right now - to get my body healthy and be fully prepared mentally also," Morgan told Gleaner Athletics.

The Jamaican has since lost his world leader status to Piotr Malachowski (Poland), who threw 68.29m on August 1, but is encouraged, having faced the Polish Olympic (2008) and World Championships (2009, 2013) silver medallist a few times this year.

"I feel really confident going into Beijing. Competing with these guys in Europe has also given me a lot of confidence because I know what they are capable of and I know the conditions. I am more familiar competing with those guys on a regular basis and I am generally more comfortable," said Morgan.

"The European schedule was tough, but that comes when you are throwing well for the year. You will get meets. I have been having some physical issues, and because I don't have a medical team for massage or for when I have knee or shoulder issues, I have to deal with those myself when I'm on the circuit," said Morgan, who this year featured at the Shanghai, Paris, and London Diamond League meets.

"I am making the best of the opportunity of the medical team that is here (at the Jamaican team camp) to get my body to a point where I can compete well and do my best at the World Championships.

"Hopefully, as the days go by, everything will connect and I will be in the best shape to compete well there," added Morgan. "My main thing is to get my body back into top shape as it was earlier in the year, and it's getting closer as the days go by, so I am excited about what is to come."

Morgan, who is currently in Tottori, Japan, for a pre-championships camp with other members of Jamaica's World Championships team, took time out to laud the facilities and hospitality at the Japanese prefecture.

"The city and people of Tottori have welcomed us with a homecoming kind of feeling. We definitely feel at home here," Morgan said.

"All the facilities here are up to standard. Everyone on the team is feeling really good about how they are facilitating us - just doing everything on a whole to make sure that we are really comfortable. We are in a really good environment."