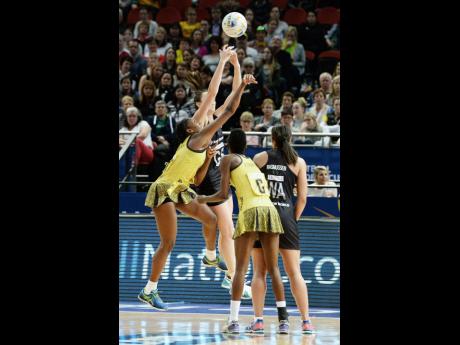 Invariably, the player bears responsibility for the result. That burden for decisions made in competition, for execution of practised routines and for delivering results rests with the athlete who steps into the court or crosses the boundary rope.

The player, however, is never alone. In reality, even the player's on-the-field responsibility is subsumed by the quality of the sports system he or she represents.

That loose ball at the death, that last-minute fumble and that long serve to a sharp opponent at match point are as much the player's fault as it is the fault of the system that produced the player.

It is through this prism that Jamaica's losses at the Netball World Cup can be viewed. Defeats from winning positions, as in the preliminary round 50-54 loss to England, aren't just due to the players or changes made by the coaching staff.

The same goes for the qualification round 48-55 setback to the undefeated New Zealanders. The Silver Ferns and their neighbours, Australia, are products of superior systems. They regularly play indoors and their combined ANZ League provides regular high-level play.

There are more part-timers on the England team, but many of them play in the ANZ. Narrow losses at the 2014 Commonwealth Games had some pundits thinking that England would break the Australia-New Zealand domination of the sport at this World Cup. We will see.

Luckily, Jamaican losses to New Zealand and England occurred at a stage of the tournament that wasn't fatal. The situation was probably made worse by the ankle injury suffered by 30-year-old centre Paula Thompson.

Provided Jamaica beat improving Malawi and Uganda, Thompson could be back at full speed for the semi-finals. That could be the key to more goal attempts for our shooters led by Romelda Aiken.

To shoot the hoop in the long term, Jamaica needs to move from being an outdoor sport played by part-timers to being contested more often indoors by a full-time senior group.

The better our Sunshine Girls become, the more they will gain access to professional leagues. That has helped England close the gap to the Big Two - Australia and New Zealand.

There are encouraging developments. Jamaica has recently launched its own semi-professional league. When that league moves indoors, that will be a major advance. Second, the promise of affordable access to national sports facilities due to lower electricity costs will give the Girls more practice in the conditions under which their rivals play all the time.

That's the hoop hope for the future. In the meantime, the Girls seek now to reach the semis and to upset the form chart in Sydney, host of the Netball World Cup.

Before you give up in the presence of two superior systems, remember one thing. Upsets actually do happen. That's why we play the games.

- Hubert Lawrence did radio commentary on the 2003 Netball World Cup in Kingston.