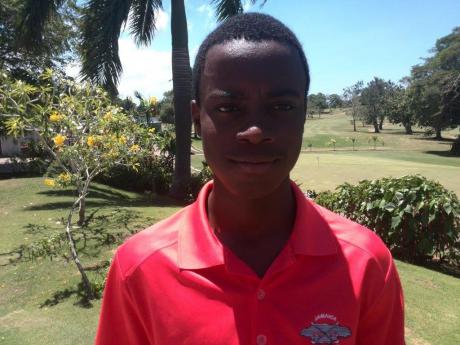 Romaine Evans pulled out all the stops at his home course this past weekend for a brilliant win.

The JGA Independence Classic held at the Sandals Golf & Country Club was supported by just over 50 golfers. With rounds of 75 and 71 (146), Evans took top honours in this 36-hole qualifying tournament, in keeping with his recent triumph at the Caribbean Amateur Junior Golf Championships in the US Virgin Islands.

Sean Morris and Gifford Wilmot, national representatives in the Hoerman Cup and Ramon Baez teams, finished second and third respectively in the Men's 0-6 category with scores of 147 and 149. Delroy Johnson, also from Sandals, tied for third position with Gifford Wilmot.

In the 12-17 category, father and son Wayne and Joshua Sutherland were first and second with 173 and 187, respectively.

Easton Williams continued his winning form from the Caribbean Amateur Golf Championship in Montego Bay, to take the Men Super-Senior title with 74 and 80 (154). Williams pipped local legend Dennis Atkinson by one stroke (155). Fred Sutherland took third position with 160 and Williams' partner in the CAGC, JGA President Peter Chin, was four strokes behind on 164.

Crystal Gayle topped the Ladies 0-12 section with 89, 83 (172) and in the Ladies 13+ grouping, Yadires Fonseca and Dianne Hudson had identical scores of 192. Hudson emerged the winner after a play-off. Sally Roper was third with 196.