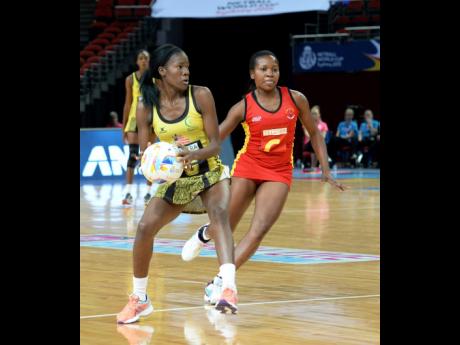 Jamaica edged out Uganda, and Barbados outclassed Sri Lanka to post their first win on day seven of the Netball World Cup yesterday.

Fourth ranked Jamaica had to dig deep to fend off a gutsy challenge from 14th ranked Uganda, 59-47, at Allphones Arena.

The Sunshine Girls found it challenging to adjust to the Ugandan style of play as Peace Proscovia was proving an essential target for her side.

Proscovia was ably assisted by goal attack Racheal Nanyonga shooting 100 per cent heading into half time, with Jamaica leading by a slender one-goal margin.

In a physical battle, Jamaica's Sunshine Girls were able to regain composure and capitalise on the scoreboard from Ugandan turnovers, leading the game 44-35 at the end of the third quarter.

Romelda Aiken scored 16 from 16 tries while Shanice Beckford converted 15 from her 16 attempts for Jamaica.

"It was very physical, it was very challenging out there," declared Jamaica's captain, Nicole Aiken-Pinnock, after the game.

"But the ladies really stepped up because we knew what was at stake, we knew that if we didn't win tonight, then we wouldn't be in the semi-finals."

Seventeen-year-old goal attack Sheniqua Thomas combined well with goal shooter Faye Sealy to power Barbados to a 34-goal win over the Sri Lankans after both teams entered the match winless.

Sealey scored 35 goals from 46 tries while Thomas converted 15 from 22 as both players capitalised on the efforts of Latonia Blackman who provided excellent service in midcourt.

The Sri Lankans were no match for the stout Barbadian defence which was excellent, particularly in the final quarter with Rhe-Ann Niles and Shonette Bruce combining for nine deflections.

"I think we all fought right to the end and it was a very good performance from everyone on court. We all really wanted this win and we got it," said Sealey after the game.

"It's been a good tournament. Of course, we had some losses that we didn't really expect or want, but we are picking ourselves up and, hopefully, we will win the rest of our games."

On Wednesday, Trinidad and Tobago played all over Singapore to prevail 75-32 while Barbados lost to Fiji 37-48.