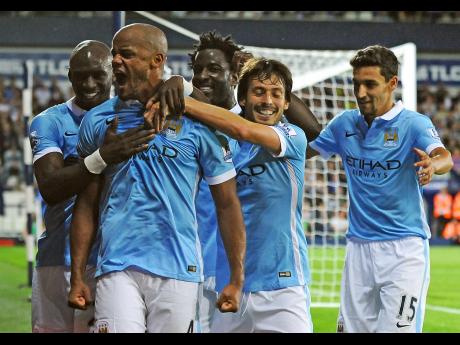 How José Mourinho must long for the days last season when Chelsea was being goaded for being "boring". The start to the new campaign has been anything but mundane at Stamford Bridge.

Tumult has replaced apparent tranquility after losing the Community Shield to Arsenal and starting the Premier League title defence with a draw to Swansea.

A victory over Manchester City on Sunday, though, would quickly transform the mood surrounding the champions.

Perhaps that is why Mourinho has shielded his players from criticism even though goalkeeper Thibaut Courtois will miss the trip to Manchester after being sent off against Swansea, with new signing Asmir Begovic taking his place.

Instead, it's the Chelsea medical staff in Mourinho's firing line. By publicly criticising his medical staff and removing doctor Eva Carneiro from her match-day role, Mourinho has generated a new wave of damaging headlines for the club.

But Mourinho's failure to strengthen the squad is now biting, with a couple of weeks remaining in the summer transfer window.

First-choice striker Diego Costa is not fully fit and new backup Radamel Falcao has much to prove after a lacklustre season at Manchester United. Mourinho wants to strengthen a defence that was exposed against Swansea with the addition of John Stones but Everton is rebuffing Chelsea's pursuit of the centre back.

Manchester City, meanwhile, face Chelsea on a high after starting their quest to regain the trophy from the London club with a victory at West Bromwich Albion.

Unlike Chelsea, City made a high-profile addition to their squad by signing Raheem Sterling from Liverpool for 49 million pounds (US$76 million).

"It's going to be a really tough season," Sterling said. "With it being our first home game of the season, we want to get off on the right foot."

There's an early opening to the second round of Premier League, with Manchester United facing Aston Villa tonight.

Although Friday night games will feature more regularly from next season, this is a one-off due to a march by the far-right English Defence League group in the Birmingham area tomorrow and United being unable to play the following day due to their Champions League playoff against Bruges on Tuesday.

David de Gea was dropped from United's opening-day win over Tottenham and the goalkeeper will be left out of the team again. Manager Louis van Gaal is concerned that the Spaniard is not mentally fit as he continues to be linked with a move to Real Madrid. Argentina goalkeeper Sergio Romero will instead seek another clean sheet at the start of his United career.

The pre-season optimism at Arsenal was quickly deflated by losing to West Ham at the start of its search for a first league title since 2004. There's another London derby for Arsenal on Sunday against Crystal Palace and goalkeeper Petr Cech will want to avoid a repeat of the mistakes that contributed to a

Leicester striker Jamie Vardy will not be sacked over a racial slur captured on camera at a casino, manager Claudio Ranieri said Thursday.

"Jamie apologised to everyone; it was a mistake," Ranieri said. "The club has said it is OK."