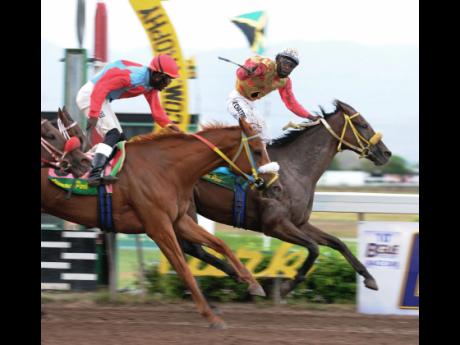 With Back-to-School activities moving into high gear, Caymanas Park will stage the eighth running of the Seek Exercise Book Trophy race over 1300 metres for open allowance horses with a purse of $1 million.

The race returns after a two-year absence, during which Book Empire Limited, manufacturer of Seek exercise books, turned their attention to rebranding and the promotion of its new composition mixed colour books.

Significantly, 10 of the 11 races on the card will carry the names of Seek products, including the Seek Composition Colour Trophy over 1100 metres, Seek Double Line Trophy over a mile and Seek Scrapbook Plaque over 1000 metres straight.

"Right now the open allowance class is the most competitive at Caymanas Park, and with this race attracting seven of the starters in the August 1 Betting, Gaming and Lotteries Commission Trophy race run over 1200 metres on August 1, which resulted in a blanket finish involving five horses, it should go down to the wire," predicted Miller.

"Back in action from that race are the winner TRADITIONAL PRINCE; the runner-up FORTUNEONEHUNDRED; SCOOP JORDYNE, who was third, and EDISON, who finished a mere half a length away fourth," added Miller, who also named this year's 1000 Guineas winner PUDDY POOH, who has worked well, and PETE'SWILDONE as others who could enter the reckoning.

"All in all it promises to be a well-supported raceday driven by the back-to-school theme, not to mention that Book Empire will be giving away 2,000 exercise books at the track, mostly to its many customers from the Portmore Communities," he concluded.