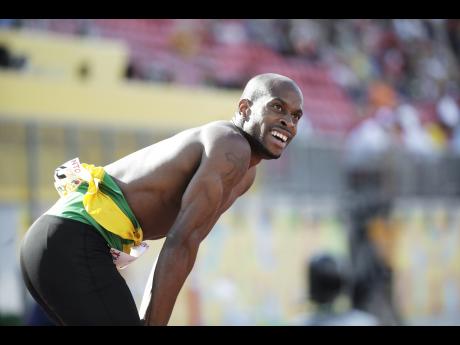 Fuelled by his recent bronze medal at the Pan American Games in Toronto and his experience training alongside some of the best in the world, Jamaican 400m hurdler Roxroy Cato says he has grown in confidence heading into next week's IAAF World Championships in Beijing, China.

Cato clocked 48.72 - the third fastest time he has ever recorded, to finish on the podium in Toronto. It's a time that leaves him way off the fastest times registered this season, where Bershawn Jackson (48.09) and Johnny Dutch (48.13) lead the world.

These are athletes that Cato is extremely familiar with, the pair being his training partners under coach George Williams, and the Jamaican is confident that he has what it takes to test them for medals in Beijing.

"First of all, any chance that I get to represent my country is a blessing for me and something I am very thankful about," Cato told The Gleaner from the team's training base in Tottori, Japan. "I am in great condition. I have been working very closely with my coach and I am feeling great even though I still haven't reached my peak form yet for the season."

"I am really looking forward to the competition because, in my eye, the 400m hurdles is an open event right now. There is no one person that is being extra dominant right now and, based on my performance at the Pan American Games, I am very confident and looking forward to a great championships," added Cato, who finished second at the Jamaica Athletics Administrative Association (JAAA)/Supreme Ventures National Senior Championships.

"Getting on the podium and beating some very good competitors was the highlight for me and of course, most of all, coming out without any injuries," said Cato, underlining his biggest takeaway from his experience at the Pan American Games.

Still Cato, the fastest Jamaican in the event this year, knows he will face a much greater challenge in Beijing, but it certainly helps that he already faces the world number one (Jackson), two (Dutch) and nine (Jeffery Gibson) on a daily basis in training.

He refers to Jackson as a source of motivation and inspiration - there can hardly be any greater impetus to beat him in Beijing.

"At this point, it's really all about execution. Me and my coach have been working closely on that because my main competitors are also my training partners. Jeffery Gibson, Johnny Dutch, Bershawn Jackson all train along with me with the same coach, George Williams," said Cato.

"I'm very close to Bershawn Jackson, he is one of my mentors and motivators. He helped me out a lot from last year into this year with my hurdling. We all motivate each other and push each other to be the best," Cato added.