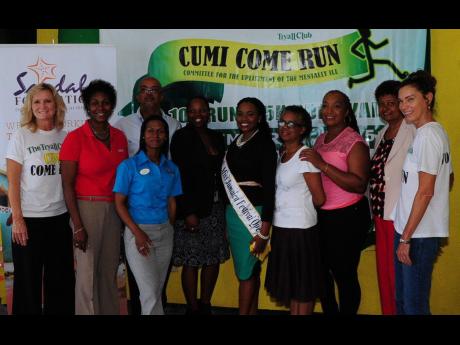 The 2015 staging of the CUMI (Committee for the Upliftment of the Mentally Ill) Come Run 5K and 10K Road races is set to attract its biggest number of participants in the seven years since its inception, with early projections pointing to more than 800 athletes.

The disclosure was made at the event's press launch at Pier One in Montego Bay on Thursday, along with news that local conglomerate, Wisynco Group Limited, has joined forces with CUMI as title sponsor to the tune of one million dollars.

Wisynco Group regional manager, Vivian Newman, told The Gleaner the move was a strategic one, which will serve to help place mental health issues at the forefront of national issues needing special attention.

"The work that CUMI is undertaking is a critical one which serves to uplift the nation. We at Wisynco therefore thought it best to join forces with them in order to keep the light shining on this very important issue of mental health," said Newman.

"We hope to have a long and beneficial association with CUMI as we strive to play our part in Jamaica's development," Newman added.

CUMI Come Run will once again take place at the picturesque Tryall Golf Club in Hanover on September 19, starting with pre-race warm-up session at 6 a.m., before the actual races at 7 a.m.

The course will take runners and walkers around and over the challenging course, which includes two hill climbs, making it one of the most challenging 5K courses in the island. Four hydration stops are also included.

Track events managers, Running Events, will be on board for another year, while some of the usual sponsors Xerox, Sandals Foundation, National Health Fund (NHF), the CPJ, Rainforest Seafoods, Solo Jamaica, JMMB and Fontana Pharmacy have all returned.

All proceeds from the event will go towards providing the necessary medical and other needs of mentally ill and mentally challenged persons in Montego Bay and throughout western Jamaica.