SA's Van Niekerk the man to watch in 400m 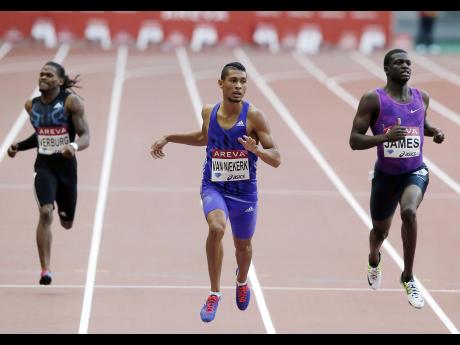 File
Wayde van Niekerk of South Africa (centre) crosses the finish line to win the men's 400m event ahead of David Verburg of the US (left) and Grenada's James Kirani (right) at an IAAF Diamond League meet on July 4 in France.

BOTH LaShawn Merritt of the United States and Grenada's Kirani James have been dominating the men's 400 metres for the past three years but Beijing 2015 could see a changing of the guard as South Africa's Wayde Van Niekerk is a strong contender and could give that country its first major 400 metres title.

Coming into the season all eyes were on the Merritt-James rivalry. James had won two global titles in a row, the Daegu World Championships in 2011 and the Olympic Games in 2012 and Merritt, the defending World champion, looked a cut above their rivals. However, things have changed significantly as this season there is more depth in the event.

It is Botswana's Isaac Makwala who is going into the championships as the number one athlete after his world leading 43.72 seconds at high altitude. Since then he has found the going very tough and it is unlikely he can trouble the top three.

Merritt has not looked his usual self his season and has been beaten on a regular basis and if he hopes to retain his title he will have to improve on his season form and run much faster than his season's best 44.36. He is a big occasion man, however, and could be waiting for the World Championships to show his class.

After winning his first major senior title four years ago, many experts thought then that the young James would have dominated for a long time to come and he underlined that a year later when he won at the London Olympic Games where an injured Merritt was absent. He started this season in fine style dominating the event with ease before running into Van Niekerk at the Paris Diamond League . The South African had shown at the New York meet earlier that he was on a mission after destroying a strong field to win impressively. Blessed also with good 200 metres speed the South African tracked James for the first 350 metres before running past him easily to win in an impressive personal and season best of 43.96 as James had to settle for second in 44.17.

James who has a season best of 43.95 could have taken the South African a bit lightly and will know now that he could be his biggest danger and not Merritt and will want to set matters straight in Beijing. Despite being defeated by Niekerk he will still be the one to beat at the World Championships as, like Merritt, he has the experience of going the rounds at a big meet.

While it looks like the medals will be shared among Niekerk, James and Merritt there are several athletes who are knocking on the door and these include the likes of young Stevon Gardener of the Bahamas who has been very consistent in the low 44 seconds, Olympic silver medallist Luguelin Santos of Dominica Republic who is peaking at the right time, Trinidad and Tobago's Machel Cedenio and Javon Francis who will carry Jamaica's hopes in the event.