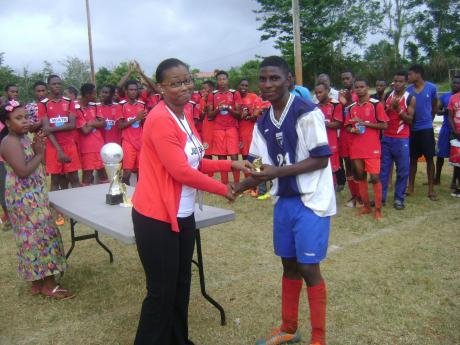 
Glenmuir's 2015 daCosta Cup squad got a welcome boost when they earned $20,000 winning incentive after topping the Knox Cup, which featured five other schoolboy football teams.
The two-day tournament was hosted recently at Brooks Park in Mandeville and featured hosts Knox, Edwin Allen, St James and Manning Cup teams Wolmer’s Boys’ and Holy Trinity.
In the first round, Glenmuir drew with Holy Trinity 0-0 and edged Knox 1-0. In the semi-finals, they defeated Edwin Allen on penalties, before earning their cash incentive in a 1-0 finals win over Holy Trinity. Holy Trinity received $10,000.
Glenmuir also won two of the five individual awards. Kevan Lambert was voted best midfielder, while their goalkeeper, Roger Miller, notched the top custodian.
Best Defender went to Ronardo Nelson of Holy Trinity, Most Valuable Player was won by Radcliffe Dawkins of St James High, while the goalscoring award was shared by Javain Henry of Edwin Allen and Dawkins.

Defending champions Connection and Rising Stars are the respective zone leaders of the Western Union-sponsored Porus Summer Youth Football League.
Connection, who are unbeaten, lead Zone A with 12 points from four games and have already qualified for the second round. Newcomers Sporting Academy are next with nine points, followed by the trio of Tuff Gong, Russia and Villa on six each.
Zone B is being dominated by Rising Stars on 10 points, followed by the duo of Galaxy and Chill Zone, on six each.
Last Sunday featured a double header at Porus Community Centre. Firstly, Rising Star had to settle for a 1-1 draw against Settlement. The second match proved the most exciting, with Villa triumphing in a high-scoring match against Russia, 5-3.
Two matches were also played on Tuesday. Chill Zone were hammered 5-0 by Galaxy, while Connection needed a late goal from substitute Nico Terry to edge Tuff Gong 1-0. Wednesday's lone encounter saw Sporting Academy thrashing Genius 8-1.
The competition continues tomorrow with two matches. Sporting Academy will be up against Tuff Gong in the first match at 3:30 p.m., while Trinity will play the final game at 5 p.m. against Galaxy.


The second leg of the National Street Gun Championship will be hosted at the Manchester Rife and Pistol Club tomorrow at its Lincoln range.
The Street Gun championship is the largest gathering of shooters for competition as it caters for ordinary licensed firearm holders. No special rigs are required and it features the basic carry-on weapons. There will be eight stages with a basic requirement of 98 rounds. Rounds and other accessories can be legally purchased at the facility.
The stages are typically designed to mirror danger scenarios the local shooter may encounter. They usually range from playing dominoes, driving in a car, lying in bed, watching television, holding a baby or sitting around a table.
The range will be open at 9 a.m. to facilitate practice.

The second round featuring the first two quarter-final matches in the Top Notch Summer League will kick-off tomorrow at the Sunset playing field.
The double-header begins at 1 p.m. and sees Sunset welcoming Broken Hurst. The second game at 3:30 features the impressive Generation United against Sinclairs' Avenue. The final set of quarter-final matches will be played next weekend at the same venue.
The final set of preliminary matches were played last weekend. The unbeaten Generation United sent Cedar Grove packing, with a 3-0 win, while Sinclairs' Avenue did the same to Star Liner, after registering a 2-1 win. The final game saw Knock Patrick edging Manchester All Stars 1-0. However, both teams advanced.

Former champions Scotiabank improved their chances of reaching the semi-finals of the KSAFA/Western Sports Business House division one league, thanks to a 2-1 win over The Gleaner at Alpha last Sunday.
Scotia, who had the better of play in the first half, went ahead through a Rohan Reid strike in the 30th minute.
They increased the lead seven minutes into the second half through Rivoli United’s Premier League player, Anthony Greenland.
The Gleaner gained a consolation goal via their prolific striker, Fabian Nethersole, in the 70th minute, his sixth goal of the season.
Two days later, Scotiabank also made progress in the KO competition, whipping National Water Commission (NWC) 5-0 in the quarter-finals at Winchester Park, thanks to a hat-trick from Nicholas Scott.
Scotia thus advanced to tomorrow’s semi-finals, where they will meet defending champions Petrojam at Alpha, starting at 3:30 p.m.
Petrojam won their quarter-final match on Tuesday as well, drubbing Wisynco 4-0 at Alpha. Carib Cement also earned their quarter-final berth by virtue of a 2-0 win over National Housing Trust (NHT) at Rockfort and will take on Peak Bottling in the other semi-final, at Barbican tomorrow, starting at 4:30 p.m. Peak Bottling had beaten Xerox 4-0 at Barbican on Tuesday, courtesy of a hat-trick from Andre Wheeler.

Power of Faith Ministries (PFM )'A' won the PFM Church Netball League with a hard fought 26-21 scoreline over Equator Faith Mission in the final at the PFM Sports Complex, 10C Dawkins Drive, last Saturday.
Debbie Coghiel was the player of the final, as she shot 22 goals from 25 attempts, while Marva Pearson-Rose supported with four goals from six tries. The top shooter for the tournament, Nickeisha Duncan, scored 18 goals from 23 attempts for Equator Faith.
Faith Temple New Testament took third place as they defeated Power of Faith 'B' 21-13.

Defending champions Edgewater FC demonstrated their attacking prowess as they hammered East Portmore Portals 5-2 in one of two semi-final games, to surge to yet another final in the Pines Imaging Centre-sponsored Portmore Under-17 Football League, at the Cedar Grove playing field.
Edgewater's leading goalscorer, Durelle Green, brought his tally to 10 goals for the season, as he struck twice. Mickel Graham also scored two goals and Tyler Dacres added a goal to complete the rout.
Edgewater's opponent in the final will be Cedar Grove, which clipped Portmore United 1-0 in their semi-final. The final will be played tomorrow at Cedar Grove playing field at 3 p.m.