Felix should edge Miller in 400m 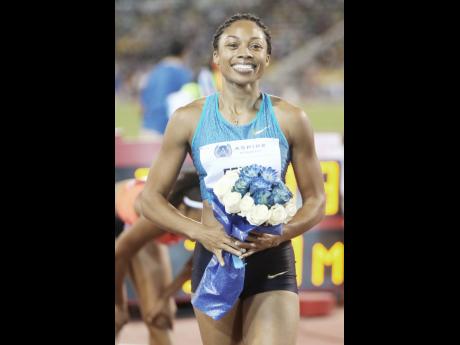 The women's 400 metres in Beijing is shaping up to be a two-way battle between Shaunae Miller of The Bahamas and American Allyson Felix in the event.

Both athletes are now ranked one and two, respectively, going into the championships. The Bahamian won in 49.92 seconds at the Lausanne Diamond League Meet while Felix clocked 50.05 to win at the United States National Championships.

Felix, who has won multiple titles in the 200 metres and who got a wild card to compete in the event in Beijing after being the Diamond League winner last year, opted for the 400 metres instead. World leader Francena McCorory who had her worst race this season at the American Trials where she finished fourth, will now only have relay duties to do. With McCorory out, Felix who finished a close second in the on-lap event four years ago in Daegu, behind Amantle Montsho of Botswana, could see this an easier option than the half-lap event.

She could regret this decision, however, as she has Miller to contend with. Like Felix, Miller is blessed with good 200m and clocked a best of 22.14 when winning at the Jamaica Invitational meet in May.

As the only sub-50 second 400m runner in the field, Miller must be confident going into the event as she is both a former World Youth and World Junior champion. Two years ago as a teenager, she finished fourth in Moscow in the 200m.

Without a doubt, Felix is one of the most talented athletes in the world and has played important roles on the United States 4x100 and 4x400m relay teams. She must be pretty confident here and a repeat of her 2011 form in the event where she clocked a personal best of 49.59 could see her getting the better of Miller.

Jamaica's Stephenie McPherson and Shericka Jackson should also do well with McPherson poised to win a bronze medal.

For gold it looks a straight battle between Miller and Felix, and Felix is given the slight edge to take home her first major 400 metres title. But if she puts a foot wrong, Miller will definitely take full advantage.