Gate-crashers Leicester on top of the BPL 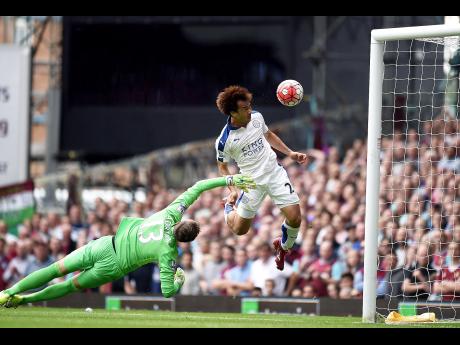 After being relegation candidates for most of last season, Leicester could be spending more time at the other end of the Barclays Premier League table this time around.

A 2-1 win at West Ham yesterday gave Leicester a second straight victory to open the season and moved the team to top of the fledgling standings, on goal difference above Manchester United.

Japan striker Shinji Okazaki and winger Riyad Mahrez, with his third goal already this season, scored for Leicester in the first half to take their tally to six goals in two games after a 4-2 win over Sunderland.

Leicester won seven of their last nine games to escape relegation in their first year back in England's top division and the good form is continuing under new manager Claudio Ranieri, who replaced Nigel Pearson in the off season.

No team has scored more points than Leicester (28) in the Premier League since the start of April, yet Ranieri is remaining grounded.

"We want to achieve 40 points to maintain the Premier League (status)," the Italian coach said. "That's our goal."

The season hasn't started so well for another team that narrowly avoided the drop last season. Sunderland were booed by their own fans during a 3-1 home defeat to Norwich and have lost both their games, conceding seven goals.

"It was even worse than last week," Sunderland manager Dick Advocaat said. "We have to go back to the basics."

Stoke scored twice in the final 12 minutes through Marko Arnautovic, from the penalty spot, and Mame Biram Diouf to salvage a 2-2 draw at Tottenham, keeping both teams without a win after two rounds.

Romelu Lukaku struck twice in the first half and Ross Barkley added a late third as Everton beat Southampton 3-0 for their first win of the season.

Swansea joined Everton on four points after winning 2-0 at home to Newcastle, with Bafetimbi Gomis and Andre Ayew scoring. Newcastle played the second half with 10 men after Daryl Janmaat was sent off in the 41st for two yellow cards.

Watford drew 0-0 with West Bromwich Albion in Saturday's other game.

Man United won 1-0 at Aston Villa on Friday and are the other team on six points alongside Leicester, ahead of Manchester City's game against Chelsea and Crystal Palace hosting Arsenal today.

Leicester were in the headlines for the wrong reasons during the week, with striker Jamie Vardy fined after he was filmed using racist language towards a Japanese man in a casino.

Vardy spoke to Okazaki, who joined Leicester in the off season, about the situation and the pair started together up front. They combined for the 27th-minute opener, with Vardy crossing for Okazaki to score at the second attempt after his initial shot was saved. Mahrez doubled the lead in the 38th.

West Ham couldn't replicate its performance from last weekend, when they beat Arsenal 2-0 away, and their hopes of a comeback ended when goalkeeper Adrian was sent off in injury time for a kick on Vardy.