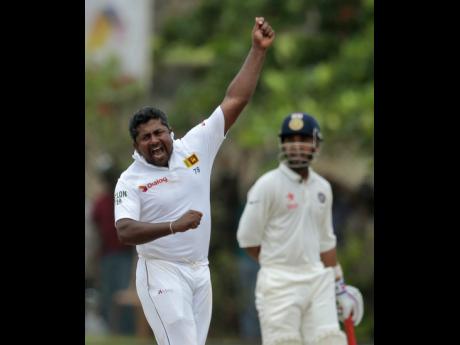 Left-arm spinner Rangana Herath took seven wickets as Sri Lanka completed a stunning comeback yesterday to win the first Test against India by 63 runs with a day to spare.

Set a target of 176, India crumbled against the spin duo of Herath (7-48) and Tharindu Kaushal (3-47) to concede defeat after lunch on day four - all out in their second innings for 112 in the three-Test series opener.

India resumed on 23-1 and lost six wickets in the morning session. The last nine Indian wickets went for only 82 runs as the tourists collapsed from 30-1.

Ajinkya Rahane top scored for India on 36; Shikhar Dhawan got 28.

Yesterday's play completed a remarkable turnaround for the hosts. Sri Lanka were bowled out for 183 in their first innings after electing to bat first, and India took a lead of 192 runs after piling on 375 in reply.

Sri Lanka were heading towards an innings defeat Friday when they were reduced to 95-5 in their second innings, but an unbeaten 162 by man of the match Dinesh Chandimal revived the hosts' fortunes, and the bowlers then put them on top.

Herath, who was dropped for Sri Lanka's last Test against Pakistan, went wicketless in India's first innings with 0-67. But yesterday, he created pressure by bowling a tight line, which India couldn't deal with.

Herath was introduced in the 15th over of the innings from the Dutch Fort End. He struck immediately, trapping nightwatchman Ishant Sharma (10) leg before wicket.

Rohit Sharma was bowled by Herath for four to make it 34-3. But the biggest break came when India captain Virat Kohli (3) was spectacularly caught by short leg fielder Kaushal Silva off the bowling of Kaushal.