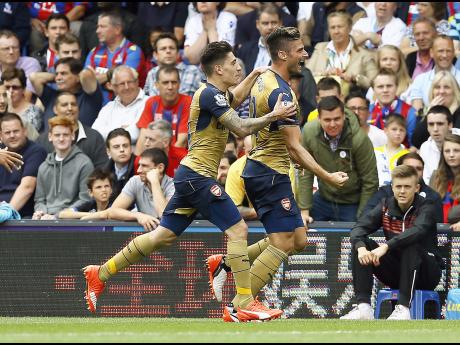 Manchester United went to the top of the Barclays Premier League for the first time since August 2015 with a narrow victory at Aston Villa on Friday night. Adnan Januzaj's early goal extended United's unbeaten run at Villa Park to 20 league games. Januzaj, given a rare start, scored the vital goal when he converted a pass from Juan Mata.

Romelu Lukaku struck twice in the first half to earn Everton an impressive win at St Mary's, their first there for more than 10 years. The Belgian's brace came from his first two shots on target, the first a header, and the second a ruthless finish high into the net. Ross Barkley, who scored two goals last season, added his second in two games before then end.

Sunderland suffered another heavy defeat when they were well beaten by newly promoted Norwich. A week after losing 4-1 at Leicester, the Black Cats were undone by two first-half goals from Russell Martin and Steven Whittaker. Nathan Redmond added a third soon after the interval, before Duncan Watmore scored on his senior debut two minutes from the end.

Swansea punished 10-man Newcastle as Steve McClaren suffered his first defeat as Magpies boss. Jonjo Shelvey set up Bafetimbi Gomis for the first goal, before Newcastle defender Daryl Janmaat was sent off shortly before half-time for persistently fouling Jefferson Montero. The Ecuadorian then set up AndrÈ Ayew to head his second Swansea goal in as many games.

Spurs squandered a two-goal first-half lead as Stoke staged a feisty come back.

Eric Dier gave Tottenham the lead with a header from a corner, and Spurs added a second before half-time when Nacer Chadli volleyed in. Marko Arnautovic pulled a goal back from the penalty spot after Toby Alderweireld brought down Joselu. And Mame Diouf secured a point when he converted Stephen Ireland's cross.

Watford are still unbeaten in two Barclays Premier League games after securing a second draw. The Hornets dominated the match but could not break through a well-organised West Brom defence. Odion Ighalo had the hosts' best chance, but put a diving header wide from six yards. West Brom could have stolen the points, but Saido Berahino missed a clear headed chance five minutes from time.

Leicester moved to the top of the Barclays Premier League with a second straight win, at Upton Park. Shinji Okazaki put the visitors ahead, heading home the loose ball after goalkeeper Adrian blocked his volley. Riyad Mahrez made it 2-0 before half-time with a powerful finish for his third goal of the season. West Ham improved after the break, and Dimitri Payet pulled a goal back, but Kasper Schmeichel denied Diafra Sakho as they searched for an equaliser. West Ham keeper Adrian was sent off for a challenge on Jamie Vardy

after he went up for a corner in stoppage time.