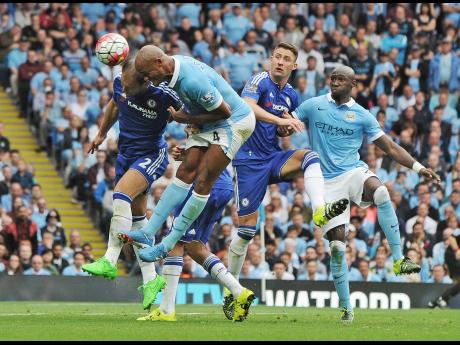 One point from two games. An unseemly spat with medical staff. A porous defence. A rival back to their rampant best.

The problems are piling up for Chelsea manager Jose Mourinho early in their English Premier League title defence.

In the first heavyweight showdown of the season, Chelsea were overwhelmed yesterday in a 3-0 loss at Manchester City that could have a lasting psychological effect among the two title favourites.

Sergio Agüero scored a stunning individual strike in the first half, before Vincent Kompany and Fernandinho added goals in the final 11 minutes, as City displayed the kind of attacking swagger that took them to the title in 2014.

"Today, we made the complete work," said City manager Manuel Pellegrini, who punched the air with delight after the final whistle as a solemn-looking Mourinho headed for the tunnel.

City top the fledgling standings on maximum points, ahead of Leicester and Manchester United on goal difference, while Chelsea are fifth from bottom after an uncomfortable start to the season.

Such was Mourinho's concern after a one-sided first half at Etihad Stadium that he removed captain and central defender John Terry at half-time, in order to add pace to his backline. It was the first time in 177 league matches that Mourinho has substituted Terry.

"He was not dancing in the dressing room," Mourinho said, "but I can tell you that he was not having a bad reaction."

Chelsea have conceded five goals in two games - they drew 2-2 at home to Swansea on the opening weekend - and aren't looking as dynamic going forward.

Throw in his much-publicised disagreement with two members of Chelsea's medical staff during the Swansea game, which led to them being dropped from match-day duties at City, and these are tough times for Mourinho.

City, which look the early title favourites on this evidence, are already five points ahead of last season's champions.

In yesterday's other match, Arsenal won their first match of the campaign by beating Crystal Palace 2-1 away, restoring confidence after opening with a surprise 2-0 home loss to West Ham.

A stunning scissor kick by Olivier Giroud set Arsenal on their way in the 16th minute, and they needed an own goal in the 55th by Palace defender Damien Delaney to secure the points at Selhurst Park.

Joel Ward equalised with a drilled shot inside the far post in the 28th, but the Palace right back was then beaten in the air by Alexis Sanchez, whose header was diverted by Delaney into his own net for Arsenal's winner.

"To get the three (points) is already a little bit of a turning point in the Premier League for us. To lose today would have been a big blow mentally," Arsenal manager Arsene Wenger said. "We have shown our strong response."

At Etihad Stadium, Agüero made amends for a slew of early missed chances by exchanging passes with Yaya Toure, twisting inside his marker and placing a pinpoint shot inside the far post in the 32nd minute.

Kompany headed in David Silva's corner in the 79th, and Fernandinho drove in a third six minutes later for City's second 3-0 victory in seven days, after beating West Bromwich Albion by that score last Monday.

Senior stars Toure and Kompany look back to their best, and Agüero was a constant menace in his first start, having come back late in preseason.

"I think Sergio Agüero is in the best moment of his career," Pellegrini said. "He was the top scorer (last season). I believe this season he can be even better."