Goule hoping for berth in final 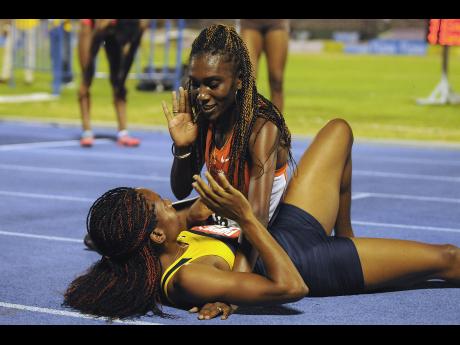 Natoya Goule hopes to make the final of the 800 metres at the IAAF World Athletics Championships that begins at the Bird's Nest in Beijing, China, this weekend. From there, she hopes to produce her best performance for Jamaica.

Goule, 24, will be one of two athletes, the other being Simoya Campbell, representing Jamaica in the event that Jamaica traditionally does not do well in. However, both women have broken two minutes this season.

Goule won the National Championships in June in a personal best 1:59.63, while Campbell clocked 1:59.29 at the World University Games in South Korea in July, making her the fastest Jamaican this year.

Goule's last race was a disappointing 2:02.16 effort for third at an American track league meet in Atlanta in early August. Her coach, Mark Elliott, who directed her to National Collegiate Athletic Association titles both at Louisiana State University and at Clemson, believes that despite the poor showing last time out the diminutive runner should be faster in China.

"That last race does not indicate much. She ran a bad, excited race," he said. "We thought she would have gone out faster, but she did not. She has not run enough races where she did not have to worry about the pace and that did not lend itself for a better result. As for Worlds, she is ready training-wise. Her workout indicates that she is ready for good performances as long as she runs her race.

"The hope is to make the final," Elliott continued. "Then we will see what happens in the final."

Having Campbell alongside her representing Jamaica makes Goule a happy camper as it means that her event will start to attract more interest among Jamaicans, Elliott revealed.

"Simoya is running well also and knowing Natoya she is happy another Jamaican is running well. But her motivation is to race well against the 1:57 and 1:58 athletes. She speaks of having more Jamaicans in her events. That makes it more likely to drum up more interest in the middle distance and long distance events."