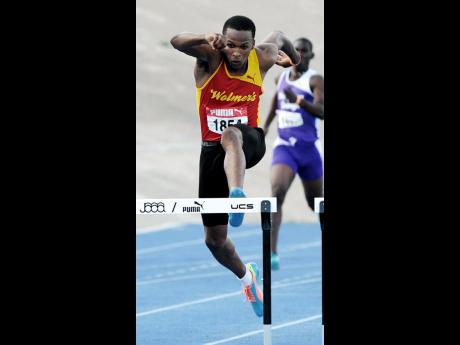 Jaheel Hyde cemented his pro status by signing a shoe/apparel deal with sports giant PUMA, brokered by his management company, Garfield Coke Management Company (GCMC). This association will directly benefit his pursuits as a student athlete who balances academics and sports, a media release from GCMC said yesterday.

The release added: "Jaheel will be pursuing tertiary studies at the University of the West Indies, and will continue training under the watchful eyes of his coaches, who have led him to three global titles, as he aims at Rio 2016. He is looking forward to the continued support of all his sponsors, management team and fans as he commits to excellence on and off the track as a professional athlete."

The governing body of track and field has denied accusations that it suppressed the publication of a study in which a third of top athletes surveyed admitted to using banned performance-enhancing techniques.

British newspaper The Sunday Times claimed that the authors of the survey say the IAAF blocked publication of the study, conducted at the 2011 World Championship in Daegu, South Korea. The newspaper says the survey concluded that 29 to 34 per cent of 1,800 competitors at the championships had violated anti-doping rules in the previous 12 months.

The IAAF says it has "never vetoed publication of this article", and that it had "serious reservations as to the interpretation of the results made by the research group", which was from the University of Tubingen in Germany.

Martin Guptill bludgeoned 60 from 35 balls to set up New Zealand's 32-run victory over South Africa on Sunday to draw the two-match Twenty20 series. Guptill's half-century at the top of the order sent the New Zealanders to 177-7 in 20 overs, batting first at Supersport Park in Centurion. South Africa could only manage 145-8 in reply, with spinners Nathan McCullum and Ish Sodhi, and quick bowler Mitchell McClenaghan all chipping in with two wickets each for New Zealand.

The victory clinched a share of the series for the Black Caps, and gives them a boost ahead of a three-game one-day international series. Opener Guptill struck six fours and three sixes to be the only batsman on either side to really get going. Captain Kane Williamson supported with 25 in their opening partnership of 52, and James Neesham had 28 from 19 balls from the middle order.