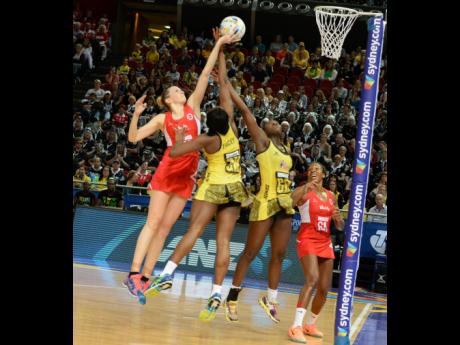 Top local netball coach Winston Nevers says if the Sunshine Girls intend to get on par with world champions Australia and number two New Zealand, there are three areas they must work on.

The many-time national champion coach said the Jamaicans' shortcomings at the just-concluded Netball World Cup in Australia, where they finished fourth and without a medal, were glaring, and they must reinforce these three areas if they are serious about making that next step.

"They need to work on three areas. They need to work on the height in the mid court; we need to be uniform right across the court, not only in the defensive and the shooting area, but we need to have height in our mid court," he stressed of the Sunshine Girls, who were beaten 66-44 by England in the bronze-medal match at the Netball World Cup at the Allphones Arena in Sydney, Australia, yesterday.

"Their percentage of converted passes in the circle and the percentage of winning the ball is higher than ours because we make more passes (in the shooting arc), and they make less passes. So we need to work on distant shooting inside the circle," he added.

The Sunshine Girls' biggest downfall against the major teams was their inability to stay focused and maintain their standard of play for four quarters. The women play for three quarters, but always have a bad period (mainly the third quarter) from which they mostly never recover. Nevers emphasised the need for the team to concentrate for the entire game.

"We need to work on our concentration level, because we are not concentrating right through a 60-minute match.

"When I went into the national programme that was what I was going to work on, especially the concentration and the shooting, but I only spent three weeks.

But if we had worked on those three areas, we could have beaten them (big teams)," he commented.