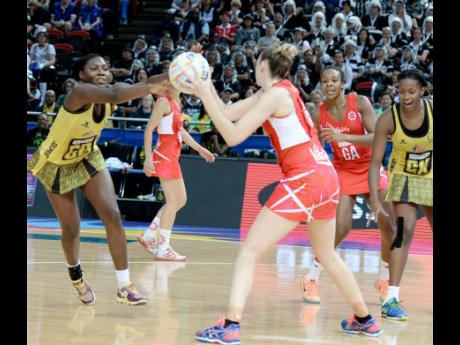 The good book reports that Jesus told Lazarus to come forth. I am confident that this should not be interpreted as a directive to the Sunshine Girls in international competition. Besides, he is reported to have said 'forth', not fourth.

Sometimes third, most times fourth, has been the mantra of our Sunshine Girls for too long. I maintain that our Girls are much, much better than fourth out of 16. Our Girls deserve better.

I am hoping that after the hype and promises of the leaders of the team before departure, decency will prevail and resignations offered.

We started every match in this tournament the same way, outplaying and outscoring our opponents, then they make tactical adjustments, we don't, and we lose.

In the third-place play-off against England - who we beat for bronze medal in the last Commonwealth Games in Scotland - Jamaica finished the first quarter five goals ahead of their English opponents. England never panicked.

After the defeat in the Commonwealth Games, they changed coach, who immediately began concentrating on the defensive aspect of their game. Thus, the act of falling behind to Jamaica in the first quarter meant that tactics and personnel needed adjustment.

Experienced defender Sonia Mkoloma was inserted (her acrobatic interceptions defied gravity) and wing defender Serena Guthrie adjusted her style, cutting off looping balls to our ace shooters, resulting in a humiliating exit for our Girls, beaten by a whopping 22 goals.

The advocates of mediocrity, who seem to revel in the fact that the Sunshine Girls are the highest ranked Jamaican team in international competition, are doing our girls a great disservice. We are better than sometimes third, most times fourth. All these girls need is proper coaching.

As the start of the World Athletics Championships in Beijing, China, gets closer, the awful spectre of doping with impunity by elite athletes continues to grab headlines. I repeat the fact that the best weapon against doping in sports now seems to be confessions and leaks.

The defenders of elite dopers seem to have a morbid fear of "bringing the sport into disrepute", and will do everything in their power to hide information, quite oblivious to the fact that this lack of transparency only serves to provide incentive to dopers.

At the 2011 World Championships in Daegu, a group of university professionals got permission from the World Anti Doping Association (WADA) and the International Association of Athletics Federations (IAAF) to interview 1,800 of the athletes at the Championships. They discovered that an astonishing 29-34 per cent of the athletes confessed to violating the rules of doping in the previous 12 months.

This information could have alerted national anti-doping agencies to add 'target testing' to their regime, thus increasing the possibility (however, remote that might be) of unmasking elite cheaters. Transparency is the key to good governance and ought not to be feared by those who have nothing to hide.