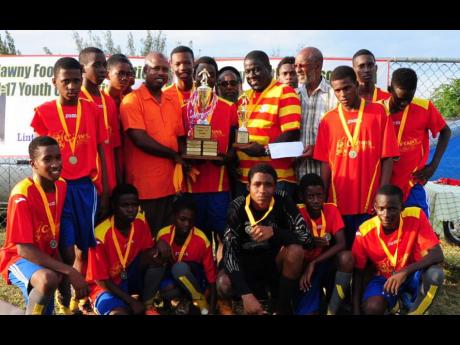 Businessman Ryan Keating, through his Progressive Group, has vowed to stay on as title sponsor of the Trelawny FA Under-17 youth football league.

This follows Sunday's thrilling final between Clarks Town and Village United at the Elleston Wakeland Centre in Falmouth.

"The plan we have moving forward is to continue our sponsorship with the association, to help develop and unearth good, talented youngsters from this parish," Keating said.

"We really cannot complain about what we witnessed in this our first season as sponsors. There were some obvious glitches, but that was expected. It's work in progress, and we are happy with the standard of most teams and the discipline of the players," he added.

Village United were crowned champions after tagging Clarks Town 2-1, thanks to a brace from their class striker, Shaquille James.

The youngster fired home his first in the 55th minute, and added his second at the 68th minute after rounding the advancing Clarks Town goalkeeper, who was left to play almost as a sweeper - with his central defenders badly out of position - then walked the ball to the goal line before booting into the empty goal.

Clarks Town did celebrate a goal, when Kirk Brown brought them temporarily back into the match with a 66th-minute equaliser at the back-end of a beautiful build-up. But his strike and celebration was short-lived.

Village had more to shout about, as their midfielder, Charles Grant, was named the league's Most Valuable Player, while Tavayne Kerr of beaten semi-finalists Harmony FC, scorer of nine goals, won the Golden Boot award.

Dean Ellis, Village United's head coach, was full of praise for his youngsters.

"This is a great way to close out the season. I hope the players learn plenty from their time out in the field. Some of us will not be here next season, but others will remain, and some will come in," said Ellis.

"I hope that we will be strong enough to retain the title when that time comes around, but right now, I am delighted with the achievement," he added.