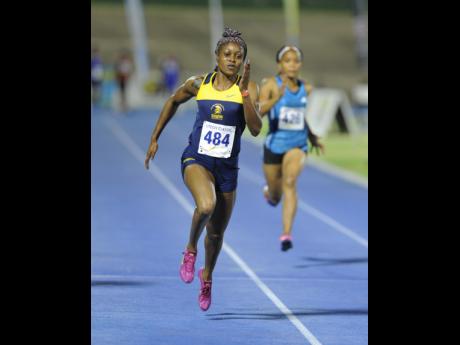 Shelly-Ann Fraser-Pryce will not defend her 200 metres title in Beijing. However, things will not change for Jamaica as Fraser-Pryce's training partner, Elaine Thompson, looks set to make a successful World Championships in Athletics debut and keep the title in the 'Land of Wood and Water'.

Twelve months ago when the name Elaine Thompson was called in track and field circles, not many would have known who she was except for her teammates at the University of Technology (UTech).

Things have changed significantly over the past six months, and the rookie is now one of the hottest female sprinters in the world.

Thompson is the second- fastest Jamaican woman this year in the 100m, behind teammate Fraser-Pryce, with 10.84 seconds.

Down to contest the 200m in Beijing, the number three-ranked athlete in the event is the odds-on favourite to win the gold medal.

The Stephen Francis-coached athlete competed with the big guns for the first time in the 200m at the London Diamond League meet in late July and clocked a personal best of 22.10 seconds.

What made that victory impressive was the manner in which she destroyed the American, Candyce McGrone, who, days earlier, had scored a convincing win in Monaco in 22.08 seconds. However, she was no match for Thompson, who even had time to 'shut it down' close to home. Sub-22 seconds is definitely on the cards for Thompson, as this could be the start of a dynasty.

With many-time champion Allyson Felix opting for the 400m, McGrone will be the flagbearer for the United States in Beijing. Jenna Prandini, with a season-best 22.20, Jeneba Tarmoh, 22.23, and Senior Pan Am Games champion Kaylin Whitney, 22.47, are the USA's other prospects.

Good competition is also expected to come from Dafne Schippers of the Netherlands, who was a close second behind McGrone in Monaco in 22.09 seconds.

Two other Jamaicans, Sherone Simpson and 2005 and 2011 champion Veronica Campbell-Brown, will be hoping to medal as well. Despite their experience, they will need to do something extra special for this to happen. With season-best times of 22.62 and 22.61 seconds, respectively, they will have to show dramatic improvement.

Also, 2013 silver and bronze medallists, Murielle Ahoure of the Ivory Coast and Blessing Okagbare of Nigeria, will be hoping to improve their placings.

Thompson, however, looks the most likely winner.