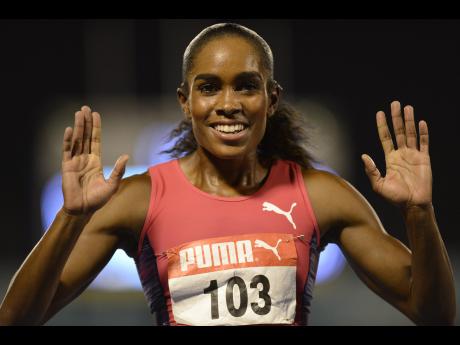 It has been seven years since Shevon Stoddart last wore the national colours at a major international event.

Still, the 32-year-old 400m hurdler told The Gleaner that she never lost courage or self-belief and with the IAAF World Championships in Beijing, China, just a few days away, Stoddart is looking to show her worth in the place where she last competed at this level, the Bird's Nest.

Stoddart crossed the line in second place at the Jamaica Athletics Administrative Association (JAAA)/Supreme Ventures Limited National Senior Championships in 55.29 seconds, her fastest time this year and the best she has posted since going 54.71 in 2008. That mark is only bettered by her 54.47 personal best recorded in 2005.

Still, Stoddart, who has also made a name for herself as a model, is some way down on the performance list in the event this year, with 70 faster times already posted in 2015.

Nonetheless, the athlete, who said that she is honoured to be back on the Jamaica team, is also looking to improve her time in Beijing and is far from ready to count herself out despite her ranking on the top list.

"I've never doubted myself. It has not been hard because I believe in my talent and I love what I do. I'm thankful for the career I've had so far. I've learned a lot and at the end of the day, nothing that is worth it comes easy," said Stoddart.

"I'm very thankful for this accomplishment. It's always a honour to represent your country, especially on this level and I've worked very hard to do this," said Stoddart, who listed a new diet and increased treatments as reasons behind her return to form.

"The 2008 Olympics was the last time I represented Jamaica. I got injured after the Games and it has been a battle to return. It took a long time to get where I am today, but I kept my faith and believed in my abilities," Stoddart added, before pointing to her objectives.

"My target is to leave it all on the track and compete the best I can," Stoddart said. "Running a personal best is definitely something I want to achieve here at this Championships. I don't know exactly what time will make it to the finals, I will just be making sure I am one of those finalists."