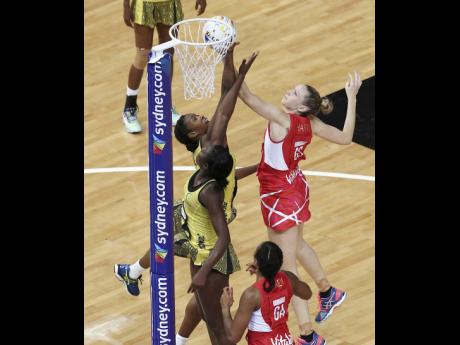 Sunshine Girls captain, Nicole Aiken-Pinnock, said the team is bitterly disappointed with its outing in the World Cup.

She said they plan to go back to the drawing board and analyse their campaign.

Jamaica finished fourth after going down 66-44 to England in Sunday's bronze-medal game at the Allphones Arena.

The defeat was the second to England in the tournament, after going down 50-54 in the group stage in Pool B. Jamaica finished second to the English, who played unbeaten to top the group.

In a virtual repeat of the last World Cup, four years ago, Jamaica managed to reach the semi-finals, where they were beaten 67-56 by reigning and eventual champions, Australia.

Aiken-Pinnock conceded, however, that Jamaica were up against teams which possessed far-superior resources.

"We're competing against nations who have the best resources in the world," she pointed out.

"We're talking about Australia, New Zealand and England, and we always have to be working overtime to get where we are. We just have to go back home and do some work."

Jamaica entered the tournament fourth in the world and, with their final placing, remained in that position.

Aiken-Pinnock believes amid the disappointment, maintaining their world ranking was a reason to be pleased.

"We did fantastic. We're still number four in the world, and that is something that we still have to be grateful for."