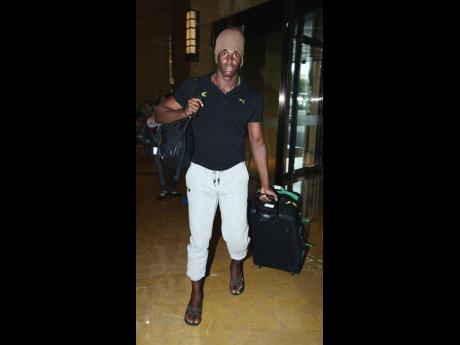 Ricardo Makyn
Federick Dacres at the Kuntai Hotel in Beijing.

National discus and Pan American champion, Federick Dacres, is not putting too much pressure on himself as he gets ready to compete in his first major international competition, the IAAF World Championships in Beijing, China.

Dacres, who just over a year ago underwent knee surgery to repair damages to his meniscus and anterior cruciate ligament, is reaping the spoils of his first full season as a senior athlete and says he is looking forward to being able to give his best effort in Beijing, with one eye set on first of all progressing to the final of the competition.

"I feel good. It's my first real senior year because I was injured last year, and so it's my first year finishing the season. It really feels good to be here," he told The Gleaner.

"It was difficult to come back from that injury. Being injured takes a toll on the mind, and I was worried about how I could get back and I didn't want to be a has-been or something like that, so I just focused on getting stronger while I couldn't use my legs and when I got my legs back, I focused on strengthening the legs,. and it has brought me here, so I feel good," added Dacres.

"I'm just throwing and hoping to give my best, and I hope that I can do something in the final, so I'm going in with an open mind to see what can happen," Dacres said.

The former World Youth and World Junior champion says he was boosted by his win at the Jamaica Athletics Administrative Association/Supreme Ventures Limited National Senior Championships, where he got the better of fellow World Championships qualifiers Jason Morgan and Chad Wright.

"Every title counts, so winning the national title has certainly helped my confidence, and I'm going into the World Championships confident that I can do well and deliver on the day," said Dacres. "Mentally, I am where I need to be. I have thrown 66 metres twice this year and I have had a good year, so my mind is here, and hopefully, my body will follow through."

Dacres' season best of 66.40m makes him the second-best Jamaican this year behind Morgan's national record of 68.19m and the 10th best on the planet.