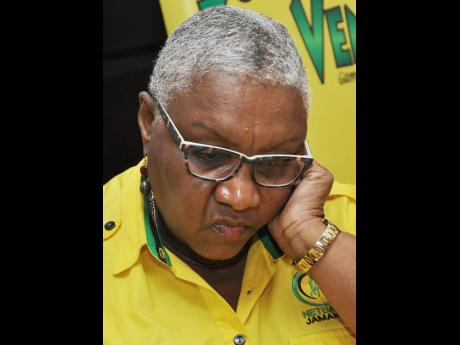 Netball Jamaica President Marva Bernard defended her players and their fourth-place finish at the just-concluded Netball World Cup in Australia, on their return to the island Monday night.

The Sunshine Girls left the country at the start of the month on a mission to bring home gold, having never made the finals before.

However, defeats to England in the first round and to New Zealand in the second round, coupled with a loss in the semi-finals to Australia and a 22-goal defeat in the third-place match against England, left a bitter taste in the mouths of most Jamaicans who were optimistic the team would return with at least a medal after unprecedented support and preparations.

But Bernard insisted the girls gave their all and were unfortunate, as well as disappointed, not to come home with a medal. She also expressed disappointment with the treatment meted out to the players on social media.

"We are disappointed, extremely disappointed. The girls have taken it very badly. They knew that we left here on a mission. As we cannot leave here wanting to be number four, we wanted the gold and it didn't happen, but we surely gave a good account of ourselves. But I stand by what I left here saying, we went there to win," she told reporters.

"Even though we did not bring back the gold, I want to thank all our sponsors and our supporters for making it possible to go to this world tournament. We didn't win a medal, but we did not lose our ranking," she noted.

"One of the biggest disappointments ... felt were the posts on social media. Some threatened them. One man posted he 'had a red brick soaking, waiting for them to come back without a medal', when you are far from home and you are doing your best.

"It reflected badly on us as a people, because our social-media pages are very strong in Australia, New Zealand and England. There were some horrible comments posted by even people the girls play with," Bernard said.

"It reflected bad on my people and it looked bad on my players, too. It was very demeaning, the negative and vile [comments hurled] at these girls were very harsh and we don't know if we must take these threats lightly or not," commented Bernard, whose term as president is at an end.

"The cycle ends now. I have two months to wrap up, so a new cycle begins. The coaches and general manager will sit and chart a course for 2019."