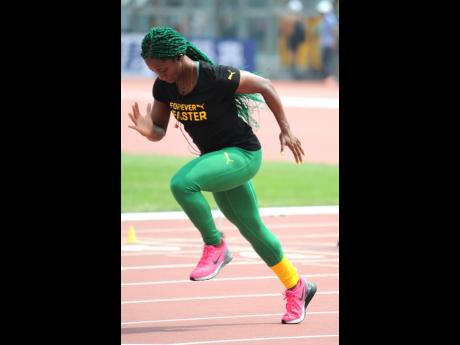 Coach Stephen Francis yesterday confirmed that Shelly-Ann Fraser-Pryce, who is listed to compete in the 200m at the IAAF World Championships in Beijing, China, will only be running the 100m, noting that he is expecting a show from the defending double sprint champion.

Francis shared that he had decided since last year that the four-time Olympic and seven-time World Championships medal winner would only compete in the 100m this year, as he sets one eye on ensuring she is in the best shape to secure her legacy at next summer's Olympic Games in Rio de Janeiro.

"Her situation is really geared towards next year. We took the decision this year that the competition would not be as great in the summer because we are trying to build a big base for her next year, where she can run as well and compete as well as she would like," Francis told The Gleaner.

"That being said, this year I think she is certainly the best she has been. There are still a couple technical things that she still needs to iron out, but by and large she has been doing really well. We expect that she will run brilliantly on Sunday and Monday (200m heats, semi and final)," Francis said.

After a poor showing in her season-opening Shanghai Diamond League run in the 100m in May, Fraser-Pryce has bounced back to win all five of her short sprint races to date, going sub-11 seconds in all but one and twice going below 10.80 seconds.

Her 10.74 is the fastest time by a woman this year, but she is also responsible for three of the five fastest times registered in 2015, making her the clear favourite to retain her 100m World title.

However, despite expecting his athlete to win again, Francis is also keen on ensuring she wins again at the Olympic Games, where he recognises that her legacy as the greatest ever female championship sprinter can be carved deeper into the root of track and field history.

Francis shared that this was a decision taken as far back as last season.

"This has been in motion since last year. We decided last year that she would not run the 200m, but she has been doing the training and I guess she thinks she is doing the training so she may run, but we already decided that she needed to get the technical basis of the 100m down pat because doing the 200m work in the past has eroded that," he said.

"She needs to iron out her start and middle phase and that is what we have been emphasising this year, but the aim is still for her to do the 200m next year, so the work for her to do that is still being done."