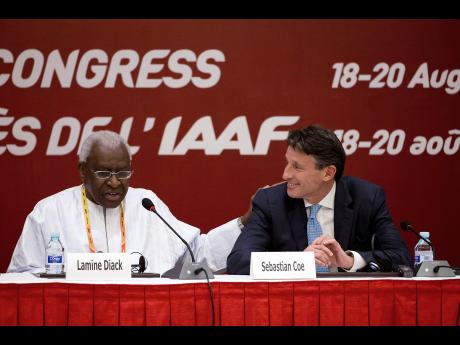 At the first news conference following his election as IAAF president, Sebastian Coe recounted a tale from his long and arduous campaign trail that summed up his single-minded pursuit of the top job in track and field.

The 58-year-old Coe, a two-time Olympic gold medallist and an instrumental figure in London's successful bid for and staging of the 2012 Olympics, thanked his support team for a "Herculean" effort as he crisscrossed the globe securing votes from IAAF members in the nearest and most far-flung federations.

"On the plane coming over here, three of them were asleep before the wheels left the tarmac," he said, recalling the trip to Beijing ahead of yesterday's IAAF congress and elections. A flight attendant remarked that the team seemed relaxed, but Coe quickly countered that they were absolutely exhausted and explained: "We've done 700,000 kilometres since Christmas."

"She said 'Actually, that's quite dangerous.'"

Whatever it takes to win.

Coe received 115 votes in the poll, 23 more than rival candidate and Ukrainian pole vault great, Sergey Bubka, who later retained his position as an IAAF vice-president. The former Conservative Party lawmaker and head of the British Olympic Association will officially take over as IAAF president after the World Championships conclude at the end of August, replacing 82-year-old Lamine Diack of Senegal.

"As your president, I will represent athletics in the Olympic movement. Not the Olympic movement in athletics," Coe said in his final pitch to delegates in Beijing yesterday. His "declaration of war" statement against recent media reports of alleged mishandling of blood samples in the sport underscored his absolute commitment to the federation, he reminded them.

"As you've seen in recent weeks, I'm standing in your corner. Your fight is my fight."

Coe forged a never-give-up reputation by winning the 1,500m Olympic titles at Moscow in 1980 and Los Angeles in 1984 during a renowned period for middle-distance running. He also set eight outdoor and three indoor world records, including three in a 41-day stretch during 1979. He applied his competitive instinct from the track into a post-competition career that led him into British politics, big business and international sports administration.

"It has been a long journey - I joined an athletic club when I was 11," he said. "I had the joys of being an Olympian ... but this for me is the pinnacle.

"It's my sport, my passion. It's the thing I've always wanted to do."

Coe vowed to devote himself full-time to the IAAF job, saying: "I have too great an affection for this federation not to be doing that."

But that involves merging those responsibilities with his existing roles which also include being a member of the IOC Coordination Commission for the Tokyo 2020 Olympics, being executive chairman of CSM Sport and Entertainment and a global adviser to Nike.

"How I combine that is something that I've always managed. My life has always been fairly complicated and very busy," said Coe, a twice-married father of four who also undertook an exhaustive campaign to help London win the rights for the Olympics.

"I have a team dedicated to make sure that works. Anything I have to do to accommodate around the presidency of the federation, I will do."

First on the agenda for Coe is dealing with the latest doping controversy swirling around track and field, following reports in the German and British media that cited leaked test results from a 2011 study in an IAAF database and asserted that blood doping was rife in the sport.

Coe said he needed to discuss with his council the process for having a fully independent anti-doping tribunal established before releasing any details.

"It's very important," Coe said of the biggest issue confronting him. "But ... I don't want the thought that trust and integrity is only something that's rooted in our challenges around doping in sport or doping in track and field. There is a universal problem for that in sport. We've been in a lead role for as long as I've been in the sport.

"That's something I will very happily defend."