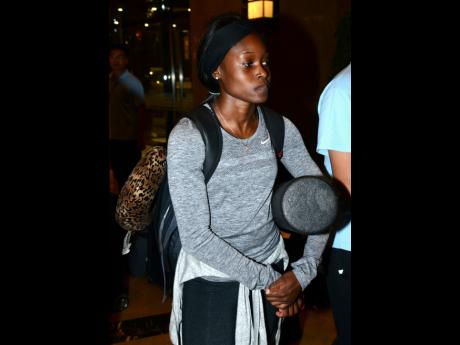 Ricardo Makyn
Elaine Thompson on her arrival at the Kuntai Hotel in Beijing, China.

Her less than ideal start puts her at a disadvantage, but coach Stephen Francis believes that with a few tweaks, fast-rising Jamaican sprinter, Elaine Thompson, will be ready to test Olympic and World champion Shelly-Ann Fraser-Pryce in the 100m.

Thompson, the national champion and fifth fastest woman in the 200m this year, will be representing Jamaica in the 200m at this weekend's IAAF World Championships in Beijing, China, with many expecting her to end her campaign with a medal around her neck.

It's an amazing change of fortunes for a youngster who last year this time was hardly on the radar of Jamaica's track and field.

With a personal best of 10.84 in the 100m, there has been much discussion about whether or not the University of Technology student should also be contesting the 100m here and bringing the challenge to her more celebrated stablemate.

So says Francis, who outlined that the young sprinter's sluggish start would leave her with no chance against Fraser-Pryce, but is expecting her to develop into one of the world's best double sprint threat by next year.

"I think she is capable of running PBs at this meet," Francis told The Gleaner. "All things being equal she can run PBs. No one can say where what time will put you because you are responsible for your own lane. What someone else does in their lane is up to them, but I think that she will certainly; I will expect her to run faster than she has already run the season.

"The plan for next year is to work on her power, strength and explosiveness to get her out of the blocks so she can have a chance against Shelly-Ann (Fraser-Pryce) because if she doesn't do that, then she won't have a chance," said Francis. "And. If she masters that then she could easily be a consistent 10.7 sprinter."

It almost seems inevitable given Thompson's immense talent. But what does it mean for Fraser-Pryce and the harmony within the MVP camp? Francis doesn't seem too bothered.

"Everybody in MVP feel that they get too little attention, we always tell them that if attention is what they need they are at the wrong place. We give them enough attention for them to perform well and so therefore if you want attention then they have to go somewhere else to someone who will give all the attention they need. What we give is performance," said Francis.

"There is the natural tendency for jealousy, but it's something which they learn over time to keep down because it's really what you make of it. You determine what is done with what you get, so it's generally not a problem for me," he added, noting that the club's set-up also makes it easier for young athletes like Thompson to better manage the extra outside interest in her career.

"Our set-up is like a closed environment, so it's hard for that kind of stuff to filter through except from on social media, so it's easier for them to deal with it as long as they are in our environment in the summer. She has not competed much in the summer, she did a couple strategic competitions just to establish where she was," he said.