Ashley to fight for WBC title on September 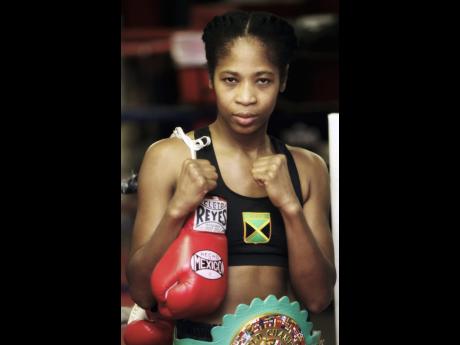 Alicia 'Slick' Ashley will get the opportunity to regain her World Boxing Council (WBC) Super bantamweight title on September 15, when she meets Christina 'Lightning' McMahon from Ireland in Astoria, Queens, New York.

She lost the title on September 6 last year to Mexican Jackie Nava, by way of a controversial points decision. Since then, Nava also won the World Boxing Association title, and has been named a Super champion. She has, therefore, vacated the WBC title, and Ashley and McMahon will now seek to succeed her.

Ashley told The Gleaner yesterday that she was very happy to get the opportunity to regain the title that she held for more than three years, and was going into the fight against McMahon very confident.

"The Irish are tough people and I expect a good fight, but my goal is to take back my title" she said.

Both boxers are in their forties. Ashley, who is a fast-moving and clever boxer, is 47, but most people are shocked when she reveals this, as she looks much younger. She has a 22-10-1 record with four knockouts and her last fight was in Haiti last November, when she stopped Grecia Nova in seven rounds. She is much more experienced that McMahon and this will give her a decided edge.

McMahon is 41, and has a 7-0 record. She has fast hands, moves a lot and has stopped three of her opponents. Her last fight was on May 2 this year against Catherine Phiri, for the WBC interim bantamweight title, in Lusaka, Zambia, and she won by majority decision.