Aussies regain pride on day one of fifth Test 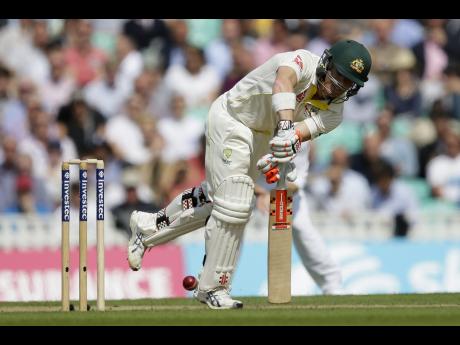 AP
Australia's David Warner plays a shot off the bowling of England's Ben Stokes on the first day of the fifth Ashes Test at the Oval cricket ground in London yesterday. Warner made 85.

Australia set about regaining some dignity after relinquishing the Ashes by scoring 287 for three yesterday on the first day of the fifth Test against England, building a strong platform in their bid for a series-ending consolation victory.

David Warner struck 85 and Steven Smith was unbeaten on 78 as normal service resumed after the chaos of the fourth Test, when England skittled Australia for 60 in the first morning to set up an Ashes-clinching win early on day three.

Australia's much-criticised batsmen showed sounder judgement after being put into bat under overcast skies and on a green-tinged pitch - reviving nightmares of Trent Bridge two weeks ago. Stuart Broad wreaked havoc on that occasion, returning figures of eight for 15 with his spell of a lifetime, but England's bowling wasn't quite as accurate at The Oval and the Australians prospered.

Warner and Chris Rogers (43) put on 110 for the first wicket before Smith and Adam Voges (47) reached stumps on an unbroken 101-run partnership, further muting what had been a flat atmosphere from the start.

"To come out and show what we are capable of is fantastic for the top order," Warner said. "We are in a great position at the moment, but we have to capitalise tomorrow."

Between the two century stands, Michael Clarke - playing his last Test before retirement - was afforded a guard of honour by England's players when he came out to bat. The Australia captain only scored 15 before edging behind off Ben Stokes, continuing his poor run of form this series.

England have an insurmountable 3-1 lead in the series and are looking to win four Tests in a home Ashes series for the first time.

For the first time in 23 Ashes Tests, the side batting first reached lunch without loss with Australia 82-0.

Playing in his last Test before quitting international cricket, Rogers was circumspect in the first session but chased a delivery from Mark Wood that had surprising bounce. Rogers' edge flew straight to first slip, with England captain Alastair Cook juggling the ball before catching at the

Warner passed his half-century for the fifth successive Test this series, and had struck 11 fours before he departed by nicking a ball from offspinner Moeen Ali to Adam Lyth at slip. Warner fell short of his 13th Test century.

Smith, already confirmed as Australia's next captain, arrived at the crease looking to avoid registering a fifth straight single-figure score - after innings of 7, 8, 6 and 5 - and he did just that.

He brought up Australia's 200 with a cut for four off Steven Finn and drove Stokes to the boundary to register his 13th 50 in 33 Tests.