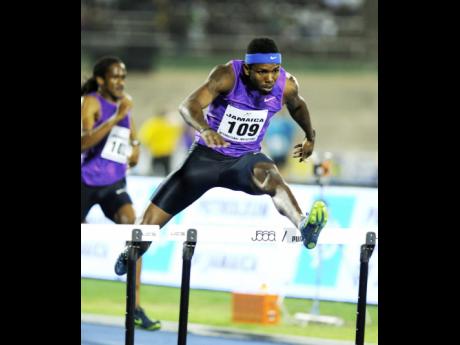 KC: Can the 32-year-old 'Batman' Bershawn Jackson fly in the men's 400m hurdles?

Andre: He really needs to get rid of that stupid nickname, but besides that, he's been the form athlete in what is usually a strong 400m hurdles field. Edwin Moses did win as a 32-year-old in 1987, and I think Bershawn Jackson can match that in Beijing.

KC: He has been having a great season and with only one defeat, and with a season best of 48.09 seconds, he looks well set to go sub-48 seconds here as well.

Andre: A gold medal for him would be a great story, too, after he came close to quitting the sport last season after he wasn't able to get into any races due to a string of poor seasons, but still, he isn't the only one doing well in this event. Johnny Dutch has also been impressive, and at 48.13, can also go sub-48 seconds here and pose a real threat. Also, he's the last man to have beaten Jackson this year.

KC: True, but among all the others who are doing well, the only one I think has an outside chance against Jackson is Michael Tinsley. After some personal problems, he seems to be getting things right, and I will not be surprised if he upstaged Jackson.

Andre: I'm not sure Tinsley will finish in the top four! Problems or not, he simply isn't running fast enough right now and will need to find a huge season best to be a factor for gold. His last and only really good race this year came in early June. That's a long time ago.

KC: Tinsley has done well over the years when it matters most. After being edged out by Jehue Gordon for the gold medal at the last Worlds, he will be even hungrier this time. He has the beating of this field and all respect to people like Javier Culson and Johnny Dutch, but I don't see any of them ahead of Tinsley for second place.

Andre: I'm going with form. I respect Tinsley's experience, but Dutch is a top-three machine. I think we both agree Bershawn Jackson will win, but I'm picking Dutch to take second and The Bahamas' Jeffery Gibson taking bronze.

KC: Yes, Jackson will go 47 seconds and win his second title in 10 years, but he must be wary of Tinsley, who I pick for second place, with Javier Culson closing out the Trifecta.