New Kingston to rebound in Race 3 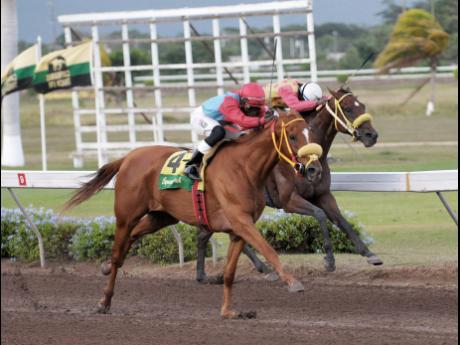 FORTUNEONEHUNDRED (left) is pushed out by Robert Halledeen to win last Saturday's Seek Exercise Book feature over 1300 at Caymanas Park.

With the $4 million Pick-9 having been caught by a lucky punter at Caymanas Park last Saturday, it starts anew with a guaranteed minimum of $1 million.

Both Super-6s offer guaranteed minimums of $750,000, the first embracing races one to six, the late Super-6 from race six to 11.

We look at the first Super-6 on the O&S Tack Room-sponsored programme, the opening race confined to $180,000 claimers over 1820 metres. ABOVE THE RADAR, with Rayan Wilson aboard, steps down two classes after his disappointing performance behind BATIDOR D'MUNDO over the distance last Saturday, but is expected to rebound among these lesser lights.

He finished a floundering last over what is considered his pet trip. But now back among his peers and only CUTTER and POCKET MONEY capable of testing him in an eight-horse field, ABOVE THE RADAR, now taking orders from trainer Lawrence Freemantle, should score easily.

TARANIS, who was a beaten favourite behind ROAD WI SEH in the August 8 TOBA Trophy over 1400 metres, is tipped to recoup losses with Shane Ellis aboard in the second race for three-year-olds over a mile.

TARANIS hurt his chances by rearing at the start in the TOBA Trophy and finished 10 lengths fourth in what was a fast-run race. He continues to look sharp at exercise under the watchful eye of trainer Richard Azan, however, and only needs a clean break to upstage the unbeaten course winner ANOTHER BULLET (Paul Francis up) and WAHEED NAJMAH (Shamaree Muir) in a field of 10.

NEW KINGSTON, having won two of his last four races and finishing a good third to CLASSY PROSPECT in the Emancipation Trophy over 1300 metres on August 1, steps down to $450,000-$400,000 claiming for the third race and should have little difficulty in winning over a mile. The evergreen nine-year-old gelding from the stables of champion trainer Wayne DaCosta is clearly a cut above his nine opponents and with former champion Omar Walker taking the ride should lead home the recent winner OUR CREATION.

PRINCESS SHEMIKA, with Walker up, only needs a clean break to topple rivals in the fourth race over 1300 metres to be contested by 10 starters. She has secured a good draw on the outside of the field and with third generation trainer Steven Todd enjoying good form, having posted a double last Saturday, PRINCESS SHEMIKA gets the nod over GREAT BROWN and GENUINE FRIEND.

The last two races in the first Super-6 should be won by ROUGH PATRICK under former champion Wesley 'Callaloo' Henry and FLASHY MAMA MIA with apprentice Marc Griffiths aboard. Their respective dangers are COURT CALL and GOLD CHARM.