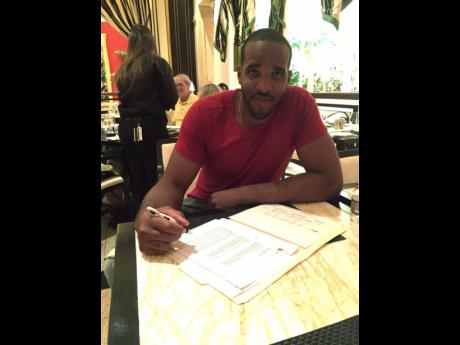 Contributed
Samardo Samuels signing his two-year deal with Barcelona valued at US$2.6 million.

It was the most valuable contract signed by the former Cleveland Cavalier, whose previous best contract was valued at US$1 million. The 26-year-old Samuels played three seasons with the Cavaliers.

After being released by the Cavaliers in 2013, the 6-foot nine centre played two months in Israel with Happoel Jerusalem before joining Dinamo Milano in the Italian League. With Samuels on the roster Milano won the Italian League title in 2014. Milano were dethroned this past season losing in seven games in the semi-finals to eventual champions Dinamo Sassari.

The former Louisville Cardinal explained that getting into the Spanish League and playing for a top club will help him raise his value as a player and could eventually pave a path back to the NBA as a starter.

"This is great. I get to go over and play with one of the best basketball teams in Europe, playing against the best players and improving my game," Samuels told The Gleaner.

Samuels' mentor Ajani Williams, the immediate past president of the Jamaica Basketball Association, praised the deal with Barcelona saying it will also help the player's longer term goals.

"This deal will further underwrite his long term goals of putting away money for retirement, and I think he has a chance to further increase his value. I also still think he has a good shot at the NBA if he wants it. But right now the math has him earning more in Europe than the NBA today," Williams said.

The first order of business, though, is winning championships at Barcelona.

"When I win titles, the people in the NBA can appreciate my talent and give me the opportunity I deserve," said Samuels, who played off the bench during his short stay in the NBA.

He was full of praise for his former club Milano, which he said helped him raise his game and earned him this contract with Barcelona.

"If I didn't go to the Italian League I wouldn't be here having this conversation," said Samuels who is visiting Jamaica so he can obtain a Spanish visa. He reports to training camp on August 27.