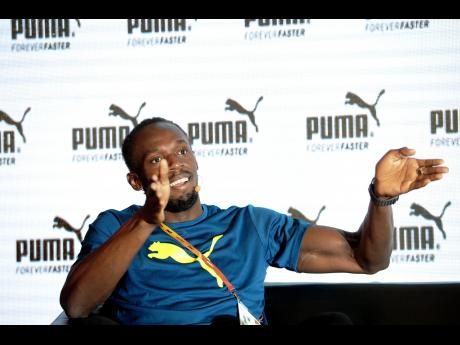 Popular dancehall artiste Chi Ching's voice pierced a Nuo Hotel ballroom as the words 'High voltage, high voltage, wire' blared from the speakers as Usain Bolt stepped towards the raised platform to speak to the world.

The world listened and the message was clear.

Track and field's poster boy is ready to send shockwaves and Bolt in Beijing ... again. This is where it all started for him at the 2008 Olympic Games - at the Bird's Nest - but with a lot more on the line this time around, Bolt declared his readiness after a less-than-convincing start to his season.

"I am definitely in wonderful shape! I am in my best shape," said Bolt as more than 200 journalists and nearly 30 TV cameras hung on his every word.

"People can say anything they want. I have been coming to championships for years, people have been running fast times for years, but that doesn't scare me because I know what I am capable of. Running one-off races are easy, but coming to a championships and running back-to-back rounds of the events is not as easy as it looks," added Bolt, who celebrates his 29th birthday today but promised that any actual celebration would be a low-keyed one.

Bolt will start the defence of his world 100m title in the heats tomorrow morning (Jamaica time) at the IAAF World Championships in Beijing, China, where he will face the challenge of world-leading sprinter Justin Gatlin, who, despite only beating Bolt once in six face-offs, is nearing 30 wins without a loss after a dominant two years in the sport.

Bolt, with his swagger clearly tuned again to 100 per cent, didn't seem too impressed at all.

"Competition is competition, and it's always about who executes best in a 100m that really counts, but I am ready to go. All I need to do is to execute, and I think that's the key thing because I haven't got a lot of races in, but I think I will get going by running through the rounds," Bolt reasoned.

"My coach (Glen Mills) is happy, and that's always key because when he is happy, I know I am in good nick, so I'm ready to go, and I'm looking forward to it," added Bolt, who is the joint most successful man in World Championships history, with eight medals.

The 100m and 200m world record holder admitted to being frustrated during his setback earlier this season and laughed off suggestions that he would skip the 200m here in Beijing.

"It's always frustrating for every athlete, but for me, it's especially frustrating when I go out there and I can't compete at my best. It always bothers me the most just sitting there watching fast times being run and a lot of things being said and you can't go out there and prove yourself," he shared.

"I don't know why people would think that (I am not doing 200m)," Bolt said with a puzzled look on his face. "I wouldn't come here if I didn't plan to run. That would have been announced and someone would have replaced me."

"I'm not one of those people who come to a championships and then not show up, and the 200m is my favourite event, so if I was going to skip any event, it would be the 100m," said Bolt.