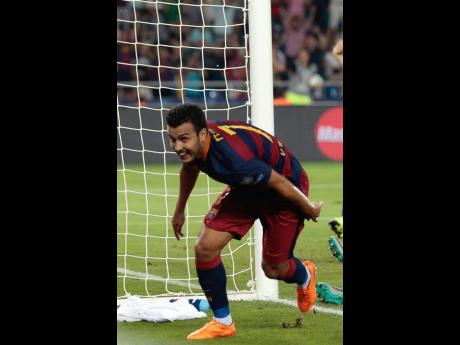 While Chelsea await a first win on the field this season, the Premier League champions scored a satisfying victory in the transfer market yesterday by beating Manchester United to the signing of Pedro Rodriguez from Barcelona.

A fee worth US$33 million was agreed to bring the 28-year-old forward to Chelsea.

The high-profile recruitment of a player who has won every major honour shifts the narrative at Chelsea following an unruly start to the season, particularly as it left United reassessing its transfer targets.

Chelsea are enduring their worst start to a season for 17 years, going back before Roman Abramovich transformed the club's fortunes with the injection of cash following his 2003 takeover.

Belinda Bencic withdrew from the Western & Southern Open because of a right forearm injury after losing the first set 6-2 yesterday against sixth-ranked Lucie Safarova.

Bencic upset top-ranked Serena Williams last weekend en route to winning the Rogers Cup in Toronto. The 12th-ranked Bencic said it's too soon to know if she will play in next week's tournament at New Haven, Connecticut.

"I don't think it's very serious," Bencic said. "I wasn't 100 percent, and to beat Lucie or even compete against her, you have to be 100 percent. I didn't want to retire. This was the first I've ever had to retire. I hope it gets better."

Safarova is scheduled to meet either 14th-seeded Elina Svitolina or unseeded Caroline Garcia in the quarterfinals.

Juventus signed Alex Sandro from Porto for US$29 million yesterday with the Brazil left back agreeing a five-year contract with the Italian club.

Alex Sandro, who has made six appearances for Brazil, completed a morning medical at Juventus, after flying to Turin on Wednesday night.

"I'm feeling very positive, I'm happy and confident," the 24-year-old said. "I can't wait to be able to start training and playing and to continue making my dream come true.

"The fans can rest assured that they have a player who will always give 100 percent to secure victories and success for the club."