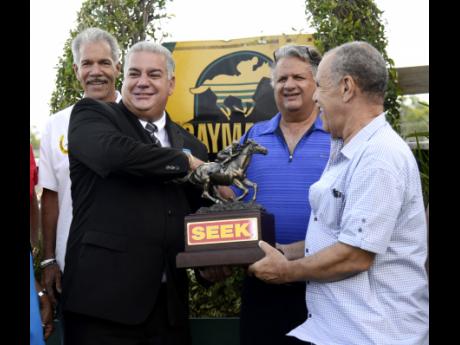 The progressive three-year-old colt BUZZ NIGHTMARE should complete a hat-trick of wins in the third running of the O & S Tack Room and Supplies Trophy (restricted stakes) over 1300 metres at Caymanas Park today. Ten three-year-olds and up will face the starter.

Trained by 14-time champion Philip Feanny, BUZZ NIGHTMARE has won three of his four races since his smashing debut over 1100 metres on February 28, winning by 11 lengths in the smart time of 1:05.3, with veteran jockey Ian 'Dolly Baby' Spence aboard.

Following that impressive display, BUZZ NIGHTMARE was installed a howling 1-2 favourite for his next race, the valuable Prince Consort Guineas Trial Stakes over 1400 metres on March 14, but ran below expectations and was beaten into fifth place by SIEMPRE BUENO and POKER STAR behind a fast time (1:25.3).

He was given a four-month respite (missing the classics as a result), but reporting well refreshed on July 18, slammed ACTION MAN by 10 lengths over 1100 metres in fast time, and quickly followed up over the round five course on August 6 when leading home ROYAL ASSAULT.

His two recent wins were not only achieved in fast times, but in post-to-post fashion, suggesting that BUZZ NIGHTMARE is on top of his game at present.

True, the 3-y-o bay colt by Into Mischief out of Queen Of Battle faces three worthy opponents in ROAD WI SEH, SHINING LIGHT, and the American-bred 3-y-o colt BRAWN, but BUZZ NIGHTMARE strikes me as having a bit more class than any of the three.

He has looked sharp at exercise, and having secured a perfect draw on the outside, should race into an early lead over ROYAL ASSAULT and the Lorne Kirlew-trained ROAD WI SEH (working well) at the half mile, holding the latter at bay in deep stretch, even with the sparingly-used Spence in the saddle. It should be recalled that Spence was aboard 'BUZZ' when winning on his debut and the jockey has been his constant partner at exercise in the mornings.

Other firm fancies on the card are down-in-class ABOVE THE RADAR in the opening race over 1820 metres; TARANIS in the second; in-form NEW KINGSTON in the third; ROUGH PATRICK in the fifth; and PRINCE ANDREW in the eighth for overnight allowance horses.